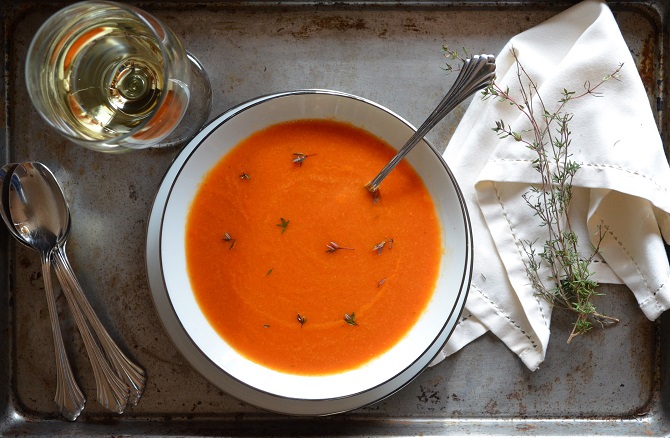 I had a friend years ago who used to say quirky little things like, "Don't forget your sunshine, Sweetie!" and made them sound perfectly normal.  She's someone who radiated warmth; she was unapologetically happy, all the time.  She lit up the room just by stepping through the door.  I was thinking about her a few days ago, remembering when we worked together in the Christmas department of Dillard's in our twenties.  She moved to California in 2006, the same year my son was born, and as the course of life led us in opposite directions we lost touch.  Still, she's one of those people you don't easily forget, and I always think of her when it's time to decorate the house for Christmas.  That same year I was given a beautiful, two-liter food mill at Chistmastime.  It was complete surprise, but I guess I'd complained one-too-many times to just about everyone that my old, cheap little food mill, which I bought to make baby food, was not too far from worthless as it left a greasy residue on the food no matter how thoroughly I washed it.

That gift reminded me of another I received 10 years earlier when I was a vegetarian.  My grandmother, like almost all grandmothers, I assume, was overly concerned that I wasn't being nourished, and so gave me a collection of vegetarian "how-to" cookbooks.  You know, the scientific kind that explain things like the ideal ratio of beans to rice needed to create a complete protein and the pros & cons of being lacto-ovo vegetarian as opposed to vegan, among many other things.   Amid the maze of complex nutritional equations I happened to stumble upon a simple recipe for bell pepper soup which I loved immediately, and made often, using my blender to puree it, batch after batch, year after year.  But the food mill I received for Christmas was a game-changer.  I started making bell pepper soup for Connor when he was a baby.  In fact, it's one of the first mixed vegetable dishes I made for both of my kids.  Back then I kept it simple, just a few key flavors without any herbs or spices, and I used the food mill to puree it to the perfect consistency for their little mouths.  It was the only way they'd eat it.  But it's by no means a "baby food."  It's an ever evolving recipe that changes as my kids' palates grow and mature.  These days I love adding fresh herbs and a hint of heat with crushed red pepper flakes.   It's still one of Connor's favorites, especially when there's a big piece of toasted baguette to dip. 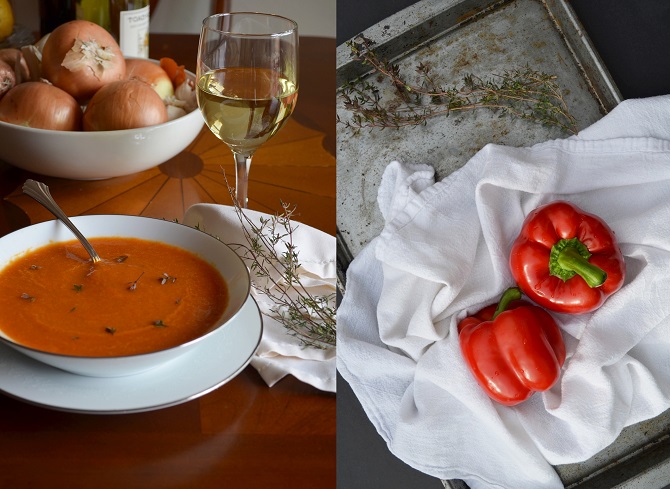 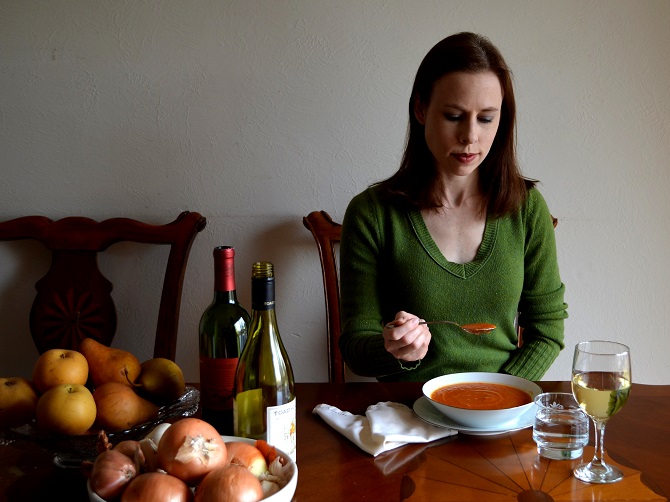 Speaking of friends, this soup has become much like an old friend who visits my kitchen often in the dead of winter when the sky has been grey for weeks on end.  She's a welcome guest, warm and cheerful, like a our own personal pot of sunshine.  Things just seem a little brighter when she's around.


There are many ways to roast the pepper for this soup, but I always roast them under the broiler until their skins are charred and black all over.  I get some kind of bizarre pleasure out of watching the skins blister and swell under the flames.  Don't ask.  And that smell!  If I could bottle it and bring it out on the darkest days, I would.   You could, of course, roast them on the grill or simply over the open flame of a gas burner, if you prefer.  Likewise, the soup can be pureed in batches, in the blender.   But if you really want that silky-smooth texture use a food mill.  Either way, it's delicious.  When bell peppers are in season and are stacked high in the farmers' market stalls, I like to roast and peel a whole batch of them, and then freeze them in bags of two, so we can make this soup throughout the year.  It's clean and so simple, and tastes sort of like sunshine.  I think my old friend would like it a lot.

Place your top oven rack near your broiler and line the bottom rack with foil.  (The peppers will drip).  Wash the peppers and place them directly on the top rack.  Turn the broiler on high.  Broil the peppers until the skin is charred and black, carefully turning them so they brown evenly.  When the peppers are completely charred, place them in a bowl with a tight fitting lid or cover tightly with plastic wrap.  Let sit until cool enough to handle, about half an hour.

Heat the oil in a soup pot and saute the onions and carrots very slowly over low heat while you work with the peppers.  Carefully cut the peppers into quarters to remove the seeds, then peel off the charred skin.  (It should come off very easily after sitting in the bowl for half an hour.)

Slice the peeled peppers and add them to the pot along with the garlic and potatoes.  Season with salt and pepper and saute for 5 to 6 more minutes.  Add the thyme sprig, red pepper, and the stock and simmer for 10 to 15 minutes until the potatoes and carrots are very tender.

Remove the thyme sprig.  Run the soup through the medium blade of the food mill or puree it in the blender until almost smooth.  Taste for seasoning and serve as is, or with a dollop of creme fraiche. 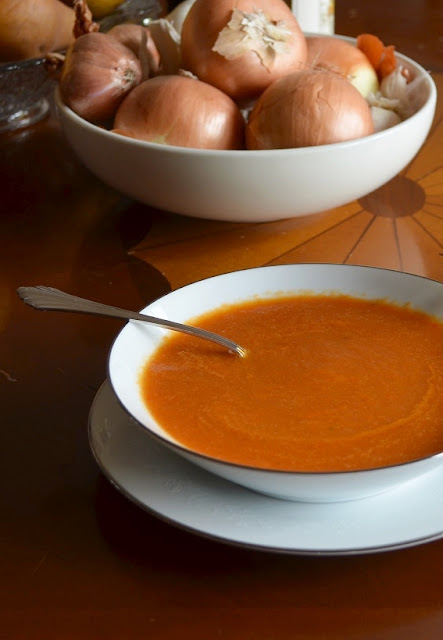