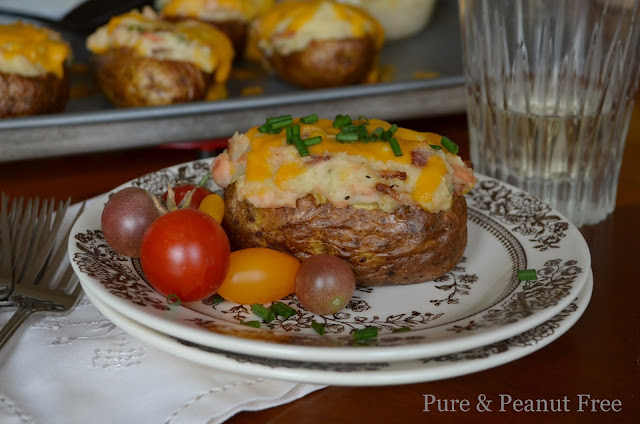 "These potatoes are EPIC!" sang my son, as he scraped the last, heaping bite onto his fork.  That, coming from a potato-hater, is pretty major!  I think it was the salmon that won him over.

The kids went back to school last week and we were all fighting the new routine.  I felt that a classic comfort food meal was in order.  Heavy in carbs, I knew it would calm our frazzled nerves and lull us into the deep sleep of which we'd been deprived.  And nothing says comfort, to me at least, like bacon, potatoes, and cheese.  Lots of it!


I had a beautiful fillet of Alaskan Salmon in the freezer.  When my eyes fell upon it I heard the words of my mother echo within my head, "Fish is brain food," -an old, long-forgotten adage from my childhood, etched on my subconscious.  Food has a way of coaxing dormant memories into bloom.   I poached the salmon in wine and water, flaked it with a fork, and added it to the potatoes along with bacon, cheddar and chives.  We could all use a little more "brain food," no?  In place of sour cream I used thick, creamy Greek yogurt. 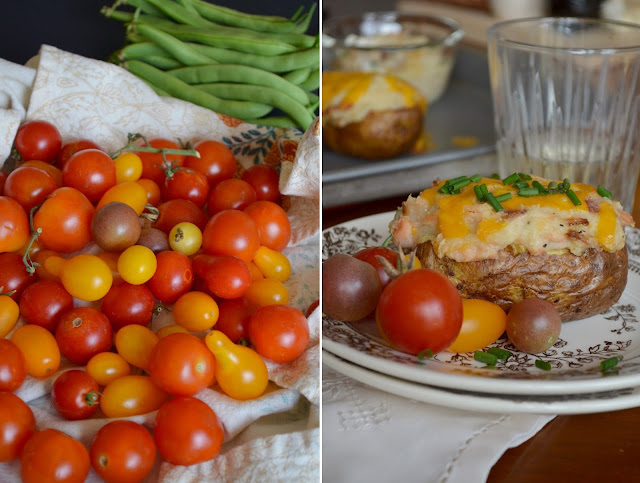 Along side the potatoes, I served garden fresh green beans, picked that morning and simmered, they were so tender that a sprinkling of sea salt and a splash of extra virgin olive oil was all they needed.  I also served a medley of these gorgeous, heirloom cherry tomatoes.  Vermilion, amber, and the most lovely shade of aubergine, I found this whimsical mix at my favourite market that afternoon, and I couldn't resist.  Fresh and bursting with flavour, I served them raw and undressed.  Sometimes the best side-dish is the simplest.

It was an epic mix of "brain food" and total comfort -  exactly what we needed to kick the school year off right.

Meanwhile, cook the bacon in a pan until crispy, and place on paper towel to drain.

In a sauce pan that is just large enough to hold the salmon, heat the water and wine to a soft simmer (alternately you can omit the wine a use all water).  Carefully place the salmon into the water and partially cover the pot.  Adjust the heat so the water just simmers, and cook gently for 10 - 12 minutes, until the salmon is cooked through.  Remove to a plate to cool.

When the potatoes are cool enough to handle, slice off the first 1/4 inch of the top.  Scoop out the inside of the potatoes leaving just enough to support the walls when stuffed.  Place the potatoes (and the tops) in a food mill fitted with the fine blade.  Place the food mill over a large bowl and process until all the potato has gone through.  Add the milk and yogurt to the potato.  With a fork, shred the salmon into small flakes and add to the potatoes.  Crumble in the bacon.  Add the salt, pepper, half the chives, and half the cheese.  Stir until well combined.  Stuff the filling back into the potato shells, piling the excess on top (if you have extra filling, simply place it in a greased ramekin and bake along with the potatoes.)  Top the potatoes with the remaining cheese and bake for 30 minutes.  Garnish with the remaining chives.

*Kitchen notes: Why use organic potatoes?  Potatoes are one of the most heavily sprayed crops.  Since they are a root vegetables they absorb and hold herbicides, pesticides, and other chemicals in the part we eat.  This makes them one of the most highly contaminated vegetable, even after being peeled and washed.

The typical potato grower stands in the middle of a bright green circle of plants that have been doused with so much pesticide that their leaves wear a dull white chemical bloom and the soil they're rooted in is a lifeless gray powder.  --Michael Pollan 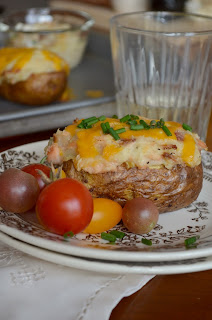