The fact that Thanksgiving is just around the corner didn't even occur to me until last Friday.  I'd left early in the morning to drive to Denver to spend the weekend at the Food Allergy Bloggers' Conference with freedible.  That day I decided to take a different route - a winding, narrow two lane highway that leads into Denver from the East.  I thought perhaps the traffic would be lighter, a less stressful, more scenic drive, because for as much as I love the city, I don't like the traffic!  I'd never actually taken that road before, but that morning I was up for adventure.  The road led through a forest just outside of town.  The forest floor was blanketed in fresh snow and the rising sun's long rays stretched through the branches in such a way that the snow shimmered like diamonds in spots.  I thought to myself, look what you've been missing by taking the interstate to Denver all these years!


Soon the trees began to thin, giving way to scrubbier  bushes, rolling hills and large boulders.  I passed a bison ranch that provides meat to some of the small markets in town.  The herd lay out in the distance, warm in their woolly coats, despite the snow.  Then I came to Franktown - a sleepy little town of 395 that I'd recalled hearing of only in passing, once upon a time.  On the corner of the only intersection in town was a small Christmas market.  No more than a stand of Christmas trees in front of a tiny boutique.  Of course, it was closed that early in the morning.  But as I drove past I could see that inside the Christmas trees were decorated in colorful glass balls.  There were dolls in the windows with brightly painted wooden airplanes suspended above their heads.  And suddenly it hit me that the holidays were sneaking up faster than I'd dare to admit.  I remembered Eva asking for an American Girl doll for Christmas.  It must have been several weeks ago, I realized!  And I'd talked her into getting a Corolle doll instead.  Together we sat at the computer and picked out just the one she wanted with strawberry blond hair and freckles.  As I drove on, I began feeling nostalgic and thankful that my little girl still wanted something as simple as a doll for Christmas.  I know too soon that a doll will be the last thing she wants.  One thought led to another - it was a very long drive - and naturally when I begin thinking of the holidays, food is one of the first things that comes to mind.  The big Thanksgiving Day feast, (I hadn't planned the menu yet) Christmas dinner (what would I make for dessert?).  But it was still so early in the morning that my mind drifted toward breakfast. 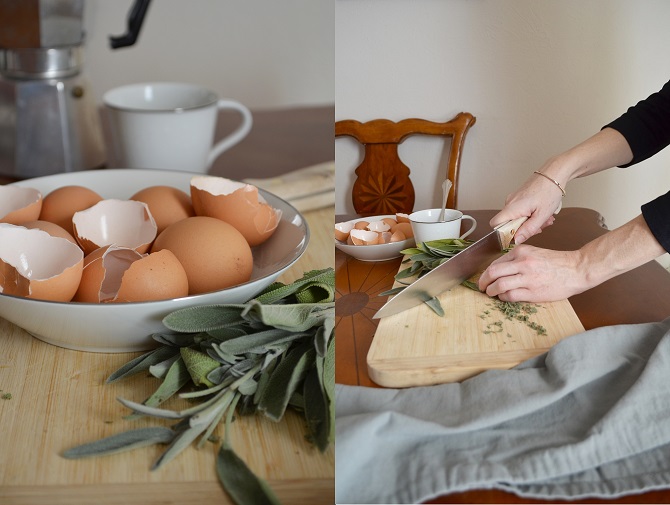 It seems like we focus so heavily on the big holiday meals that we lose sight of breakfast.  She's pushed to the back burner, so to speak.  An afterthought, shoved between wrapping presents and shopping.  Oftentimes we skip her altogether in the frenzy.  But to tell you the truth, holiday breakfasts are some of my favorite meals, and I'm not even a big breakfast eater.   It's not just about the food, but more about the magic that happens in the morning, when the kitchen comes alive with the heartbeat of those first blissfully quiet hours of the day.

I love mornings when the house is crowded with guests.  I get up early and start a pot of coffee, laced with cardamom, black pepper, cinnamon and vanilla.  The oven is switched on first thing and won't be turned off until after dessert.  People come and go, still groggy in their pajamas and slippers, on a mission to find the first cup of coffee, whose spicy aroma has wafted into their bedroom and roused them from sleep.  There's usually a game on the table, left out from the night before.  Soon a child toddles in, then another, sleepily rubbing his eyes.  "Good morning, Sunshine!" I say to Connor as he wraps his little arms around my waist.  The kids are followed almost immediately by the dog, who sprawls out in her favorite spot, right in the middle of the floor.  From this prime location she can see both the stove and the table, should a scrap of food slip from the counter or one of the children spill their milk.  This also happens to be the place where a wide sunbeam stretches through the window and across the floor at exactly 10:00 am.  Of course, it's not 10:00 yet, but she knows it's coming.  The kids begin playing with the game.  It's something fascinating, like Mousetrap, or Jenga, or the marble run.  Meanwhile someone starts a second pot of coffee and the tea kettle whistles impatiently.  The crossword puzzle has been pulled from the daily newspaper, and a few of us gather around to fill in the easy words.  Then it's left on the table for the next person who passes by.  These crossword puzzles are a community effort in our house.  The children run off again, now more awake than when they arrived.  A stuffed rabbit gets left behind and slips from the edge of the table to the floor.  The dog watches it fall, but doesn't move.  She's still waiting for that sunbeam. 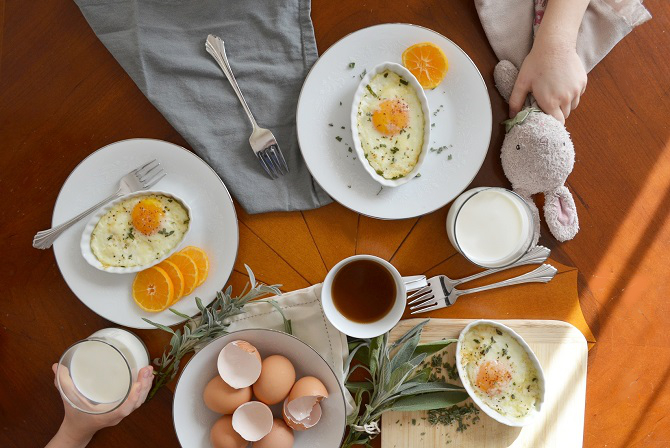 Soon everything starts to come together like the players in an orchestra before a performance, a cacophony of sounds rises from their instruments as they wait for the conductor to tap his baton and unite them all in that single first note.  Speaking of music, someone is playing the piano in the living room as breakfast is pulled from the oven. Someone else has replaced the game and crossword puzzle with plates of varying sizes and shapes. A third pot of coffee is set on a trivet in the middle of the table.  And right on cue everyone arrives, from every corner of the house, at the table, dressed with mugs in hand.  The conductor has signaled the start of a grand symphony called Breakfast.  (The dog still doesn't move, the sun is finally creeping across the floor, and she's not one for music anyway.) 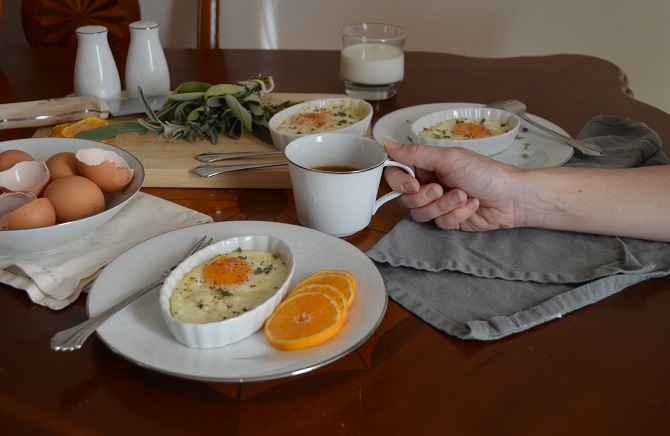 One of the greatest pleasures of holiday mornings is having the luxury of enough time to make a big breakfast.  I love baked eggs, but only make them on special occasions.  Actually, they really don't take that long to make, once the oven is preheated, and they're great for a crowd because they can be made to order - ingredients can be added or omitted as desired.  For this recipe I used the flavours of the season.  Musty sage and bright nutmeg give the eggs a certain sweetness that you just can't put your finger on.  I have a set of small ramekins that fit just one egg.  Perfect for my morning appetite, but if you have larger ramekins feel free to add two eggs.  Just adjust the cooking time accordingly.  The recipe below is written per serving so it's really so simple to customize these for the amount of guests at your holiday breakfast table. 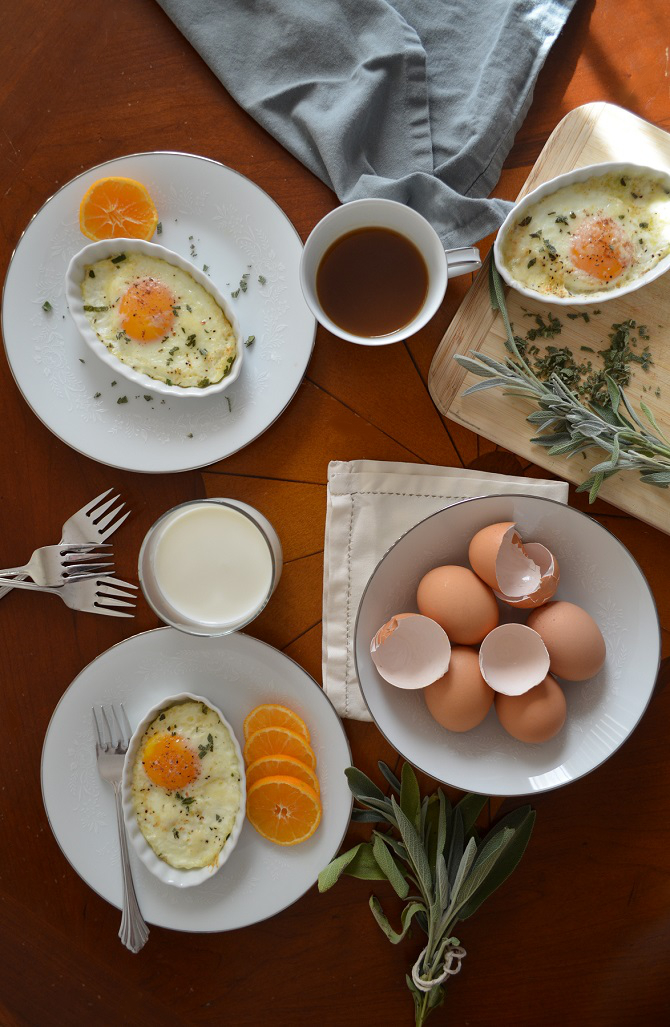 Preheat the oven to 400 F (200 C).  Place a teaspoon of butter into each ramekin.  Place the ramekins on a baking sheet and bake until the butter is starting to brown, about 6 minutes.  Watch it closely so the butter doesn't burn.

Place back into the oven and cook until the whites are just set and the yolks still wiggle.  Sprinkle each egg with the cheese.  Place back in the oven for a minute longer.  Top each baked egg with a little more of the fresh  minced sage and serve immediately. 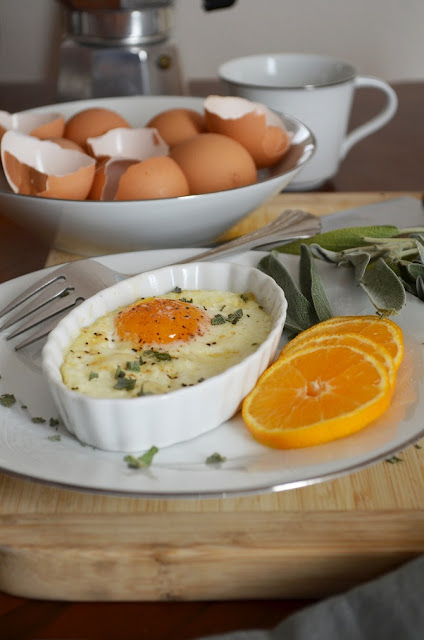