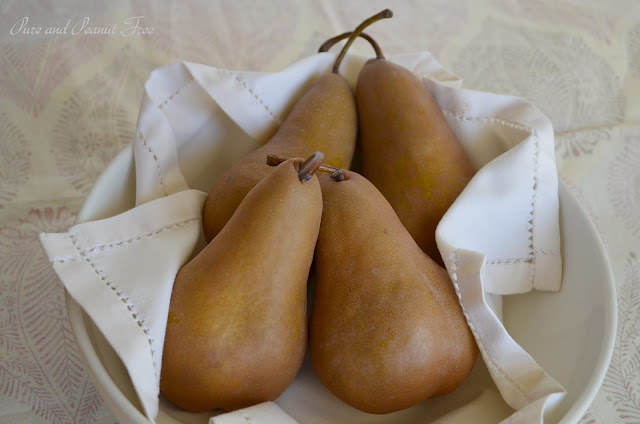 At this time of year I begin to feel a little weighed down by all the heavy foods of winter.  Do you?  I start to crave something light and healthy to finish the meal.  Something simple and sweet, while still being warm and wintry.  Pears are the perfect choice.  They're in season now and so beautiful.  And they pair perfectly with cloves which, to me, is one of the quintessential flavours of winter.

Now, while I know that there are healthier ways to eat a pear, I just love them poached and still warm, and topped with something creamy after a heavy January dinner.  You could top these with ice cream, or a little lightly whipped vanilla cream, or even some sweetened mascarpone, but I really like to pair it with Greek yogurt.  The tang of the yogurt cuts the sweet syrup perfectly, and provides just the right contrast.  I prefer a full-fat honey or vanilla Greek yogurt (like this), but if low fat fits your style, use that.  Just make sure it's a bit sweet.


As for the pears, choose ones that are still a little firm and crunchy.  They'll hold their shape and look gorgeous on the plate.  Beurré Bosc are my favourite but d'Anjou would work well, too.  Make sure the pears stay completely submerged throughout the entire cooking process.  To do this, I cover the pears with a plate that is slightly smaller in diameter than the pot.

The perfect, easy and elegant winter treat.  It really is a showstopper, isn't it?

If you've been reading this blog for a while, you know that I've been toying with changing the name for some time now.  As time wore on and the nature of this little space continued to evolve, I became more and more bothered by the title.  Like a nagging itch you just can't scratch, the title grated on my nerves.  I don't know what exactly bothered me so.  Perhaps because it was so long and cumbersome - a tongue twister to say the least.  It may have conveyed the wrong idea.  But whatever the case, it just didn't fit.

So today I decided to take the plunge and change the title.  Change is healthy, right?  I hope you don't mind.  Pure and Peanut Free is something that embodies with honesty the spirit and essence of this blog.  It's a title that epitomizes the way we eat and live around my children's allergies.  It fully represents the ingredients I choose to cook with.  Natural, clean, authentic, unprocessed - all can be summed up in the word Pure.  And everything is always peanut free, naturally.

However, in the blog world, titles run deep.  So bear with me as I work through the kinks and snags this change will cause.  I have my work cut out for me.

What do you think of the new title and cover photo?  Did I make the right decision? 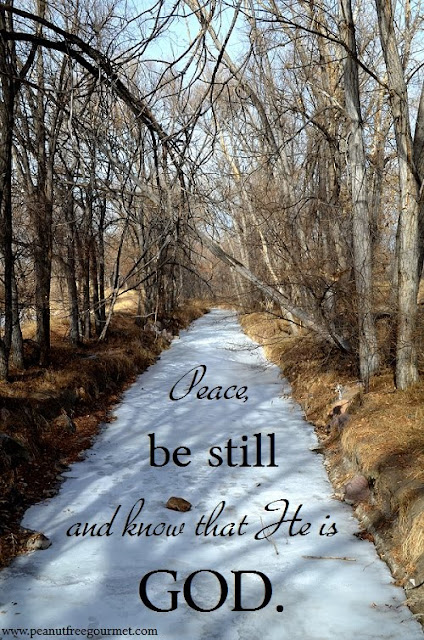 Some days are harder than others.  Days we hold back tears as we watch our children struggle with health issues.  Days when blood must be drawn from tiny veins, days when sensitive skin must be pierced with an array of toxins.  Whether it's food allergies or something so much worse, sometimes it feels as if your heart breaks within the death grip of a vice, your hope is slowly, agonizingly being pressed out.  There are days when you ask yourself, Why can't it be me?  Aren't I so much better equipped?  Why does she suffer so?  On those days, please remember to be still, if just for a moment.  There is someone greater and far more powerful in control.  Wishing you a peaceful Tuesday morning.
Posted by Rebecca No comments:
Labels: contemplations, peanut allergy

To say we've been going a bit stir crazy would be an understatement.  With a bout of flu which tore through my family, and the icy temperatures outside, the only opportunities we've had to leave the house in the past two weeks were to sniffle our way to the doctor's office (three times in four days!)  So when warmer weather was forecast for last week, and we were all finally on the mend, I was eager to get outside in the fresh air and winter sunshine. 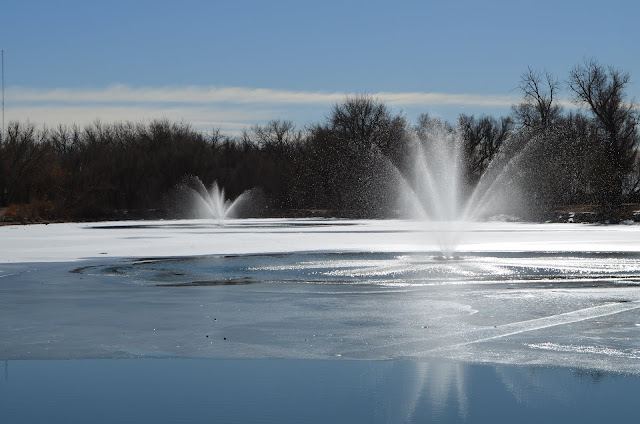 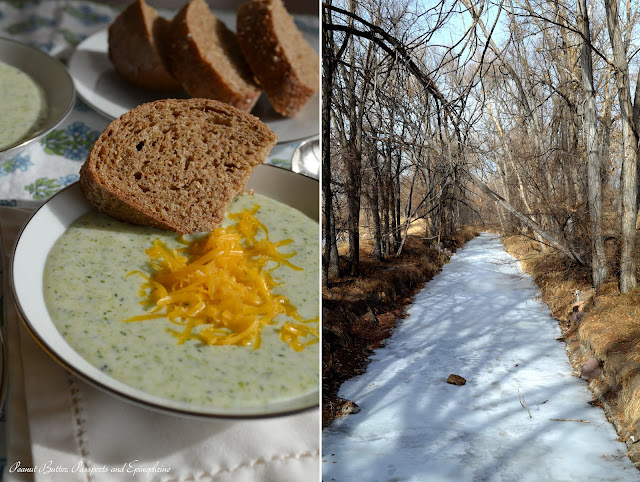 The park down the road from our home is a magical place.  In fact, if woodland sprites are real, I'm sure they must live here.  The place radiates life, even in the dead of winter.  And endless trails wind their way through brambles and thickets and into dark, secret caverns near the water's edge.  I never tire of exploring this place.  It seems with each visit we discover something new.  I like to make my way slowly around the ponds while my little ones ride their bicycles gleefully ahead of me.  I'm fascinated by the park benches, each one dedicated to someone who is loved and missed.  A memory - and I pause to read every placard.  Like saying "hi" to an old friend I've never met. 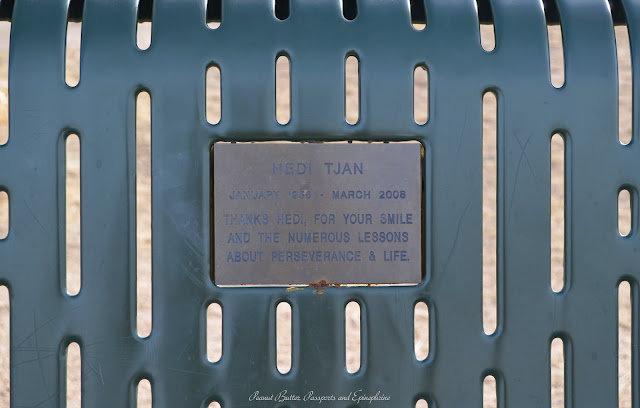 When we return home, we are chilled but invigorated.  As if the life within us has been re-awakened, and bursts forth with each excited breath.  For lunch, I quickly whip up one of our favourite soups to warm us through again. 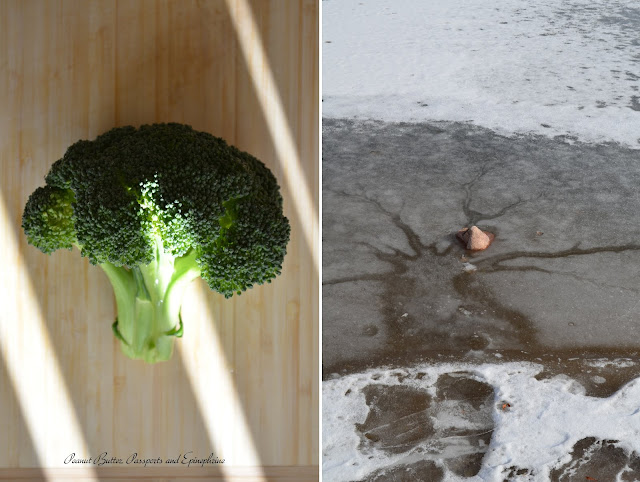 This Creamy Broccoli and Leek Soup has to be one of the easiest soups there ever was.  I mean EASY.  The only thing that could make it any simpler is if you used frozen broccoli, which you're certainly welcome to do.   I prefer to use fresh and still it takes less than ten minutes from start to finish.  With a good loaf of crusty, whole grain bread and a sprinkling of sharp cheddar cheese, this is a quick and wholesome weekday meal.  Warm and filling.

I gave up making new year's resolutions a long time ago.  If you don't make them, you can't break them, right?  However, I do like to keep a mental list running in the back of my mind.  Something to direct my focus, like a compass keeping me on the right path.  As I reviewed my posts from the last year I realized that I've neglected my gluten-free friends.  So, this year I need to follow that internal compass and shift my focus just a bit to bring you more delicious, gluten-free recipes.  It's been a goal of mine for a long time, so in the year to come look for a larger variety of gluten-free goodies added to the mix.  Of course, everything will always be peanut and tree nut free. 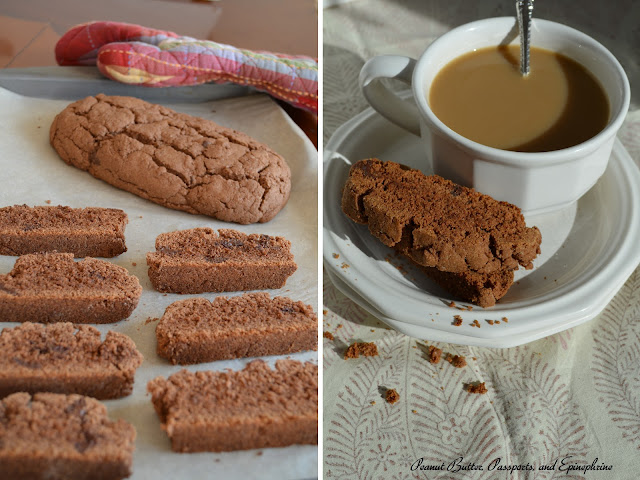 Biscotti and I go way back.  We met inside a rustic Italian farmhouse just outside of Pisa.  The terrible October wind was howling outside as only the Tuscan wind can, and inside I'd just finished a long, extravagant meal with new friends.  I'd arrived in Italy just two months earlier, and was young and giddy with naïveté.  So, when the dessert tray was presented I tried hard to conceal my excitement.  Full of Italian delectables - tiramisu, zeppole, biscotti, and tiny amaretti cookies, like jewels, each wrapped in its own pastel paper package - the tray nearly overflowed.  Excited as I was, I was also trying hard to feign maturity, so instead of diving right in, I chose one simple biscotto thinking it was the most "modest" choice.

That first bite proved me wrong!  The delicate, crumbly texture, which seemed to hold together by magic until quickly dunked into my creamy coffee.  The tantalizing crunch of toasted hazelnuts.  But the thing I remember most about that first bite was the sudden burst of anise, so unexpected that it immediately conjured up images of childhood summers spent under tangled and twisted oak branches, chewing on lengths of thick, black licorice.

Biscotti became my cookie of choice, simply because of the striking anise flavour.  Of course, I no longer add hazelnuts, but I still love to play with flavours and textures.  I fell in love with this gluten-free version the minute they came out of the oven.  They're rich and chocolaty, and perfectly crumbly.  Dare I say I like the texture of these more than that of some traditional biscotti.  And, of course, there's that essential hint of anise which complements the chocolate oh so well.  Simply perfection. 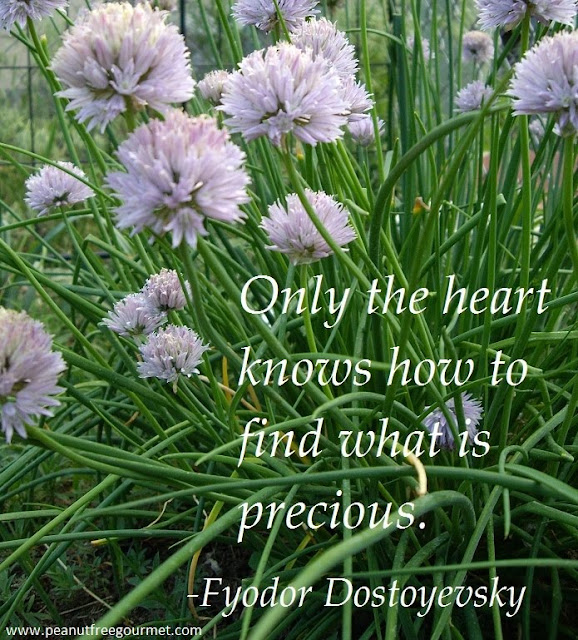 Entering a New Year with Posole


Posole.  Where do I begin?  It's an ancient dish, mysterious and grandiose with enough history behind it to write a book.  An Aztec stew from pre-Colombian Mexico.  It was eaten in times of religious celebration when corn was scarce.  At those times, the sacred, dry corn was treated with lye until the kernels became puffy and tender.  The treated corn, called hominy, was then stewed with the meat of human sacrifices.  When cannibalism was outlawed by the Europeans, pork replaced the human meat because, according to the Aztecs, the taste was very similar . . .

Disturbing?  Slightly.  But don't let that deter you from trying this festive stew.  It's thick, luscious, and spicy.  Perfect for a cold January evening, which is one of the reasons Posole has been part of our traditional New Year's day feast for as long as I can remember.  I make my Posole from a time-worn family recipe, passed down through the generations.  Of course, I've modified it throughout the years - my grandmother cooks hers in the slow cooker; my mother uses dry hominy and simmers it for hours until it's just the right consistency; I like to use canned hominy for the same reason I prefer canned beans - the silky, smooth texture - and I omit the jalapenos altogether as they just don't suit my children's tastes at this time.  But the essence, the spirit, of the recipe remains the same: a warm, hearty, celebratory stew for any winter occasion.