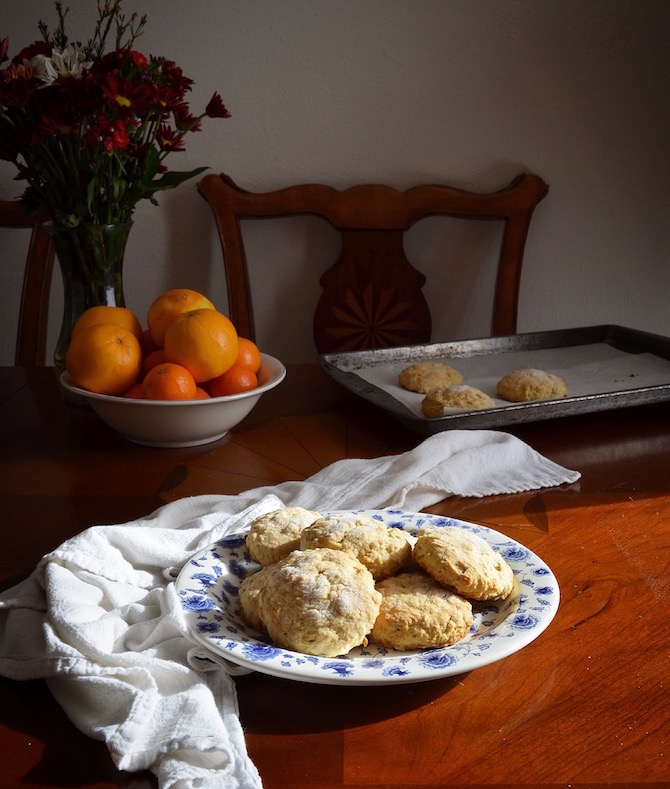 And from the shelter of my mind,
Through the window of my eyes,
I gaze beyond the rain-drenched streets,
To England where my heart lies.  -Kathy's Song by Simon & Garfunkel

My heart is in England today. Perhaps it's the cold, steal grey skies. The sun, just a white orb, failing to penetrate the icy clouds with its warmth. Perhaps it's the damp air that clings to my hair and jacket when I walk out the door.  It coats my lungs with a cold film that﻿ makes me cough when I inhale, and then escapes in a burst of heavy steam.  Whatever the reason, I find myself thinking of Darjeeling tea, wool sweaters, green hills, scones with orange marmalade, Paddington Bear, and all things comforting and English.


These scones take me back to college when I spent a few weeks alone in London between semesters.  I can almost remember the smell of damp bookshops & smokey tabbaco shops.  And I most certainly can recall the smell of fresh-from-the-oven scones in a warm coffee shop with chairs upholstered in torn & faded leather, tables chipped & greasy from ages of use set in front of a picture window that looked out onto a wet, verdant green hill painted on a canvas of grey, not too unlike the one just outside my window today in Colorado. That must be why I'm craving scones.  Because, although the memories are fading like the leather on those chairs, when you leave a piece of your heart somewhere, you can return whenever you like. 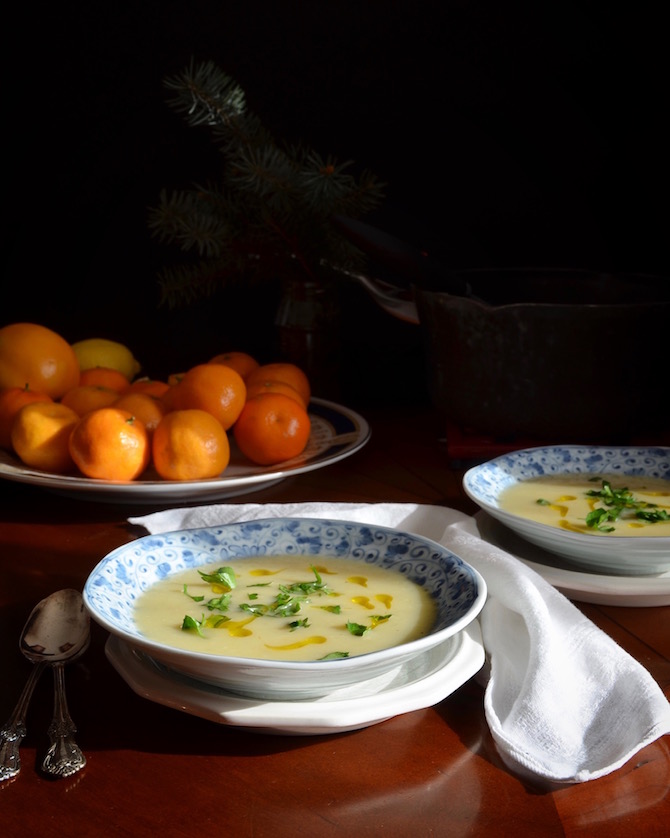 December blew in on an icy wind, the kind that whips down the mountainsides and cuts like a knife across the snowy valleys.  The only problem was that the snow was missing - and a cold wind that's not tempered by the softness of snow is often unbearable.  In such cases a steamy bowl of soup is absolutely necessary to take the edge off - thick and hearty soup, like my grandmother certainly would have made on a day like today.  She ate soup everyday and I could always count on there being a pot of some kind or another in her refrigerator when I visited after school.  And yes, she used to stash the entire pot in her fridge, sometimes with the wooden spoon still inside, ready to be pulled out and set on a hot burner.  I always preferred a bowl of her soup to a cookie or a slice of buttered bread as an afternoon snack.

On Tuesday, the temperature dropped as the wind arrived.  I had a few potatoes and leeks leftover from Thanksgiving, so just as soon as I got home from dropping the kids off at school that morning, I was in the kitchen peeling and chopping.  I started with Julia Child's recipe for Potage Parmentier - a classic - but as always, after stirring and tasting, I abandoned the original recipe for what I found in the kitchen.  Half an onion here, a bay leaf there, a splash of lemon juice for freshness.  I left out the cream altogether, as I try to limit the amount of dairy I eat.  The creaminess of the potatoes more than makes up for it!   As my grandmother would have done, I've had the soup in the fridge, not in the original pot, but ready for lunch everyday, nonetheless.   It only gets better as it sits.  I was almost sad to ladle the last of it into my bowl today.

Below is the recipe, but of course, its just a guideline.  Potatoes are such a versatile "blank-slate," you can add just about any vegetable or herb to this recipe.