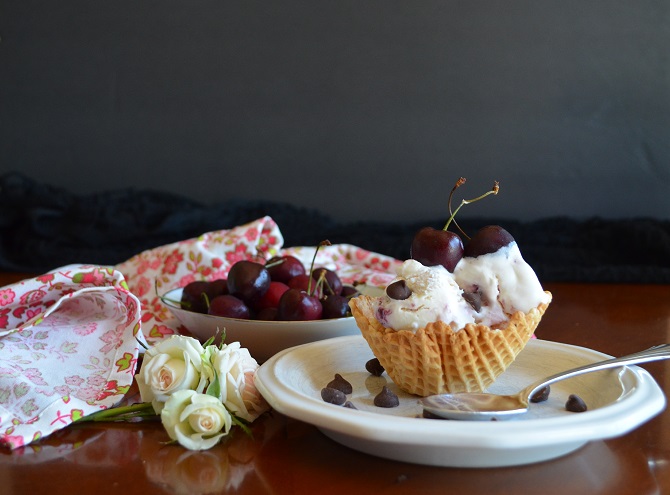 "I went away next year-
Spent a season in Kashmir-
Came back thinner, rather poor,
But richer by a cherry tree at my door." - Cherry Tree by Ruskin Bond


I used to love it when my kids would bring me the Book of Verse by Ruskin Bond.  You know how young children become enamored with adult books.  They settle themselves comfortably on the sofa, flipping through the pages as if they're reading, so grown-up.  Never mind that the book is upside-down, or that they're reading from back to front.  The important thing is that they're acting just like an adult; just like Mommy.  There they'd sit for a while, flipping the pages every few seconds, until they'd find their favourite poem, tucked among the children's verses in back.  Then they'd place the open book on my lap...

"Please read the one about the window," Connor would implore.

"Can we read the one about the cherry tree instead?"  I'd ask.  Then quickly add, "We can read them both!"

Eve, night-owl as she's always been, preferred me to read about the dark.  It starts "Little one, don't be afraid..."

That seems like just yesterday, though it was years ago.  A lifetime to them; a mere moment to me.  They can both read on their own, now.  Great literary works like Captain Underpants and the American Girl Doll series.  And they almost never ask me to read to them.  I guess I'm feeling rather nostalgic these days.  Missing the times when they were happy to listen to what I wanted to read.  But things change.  Time moves on. 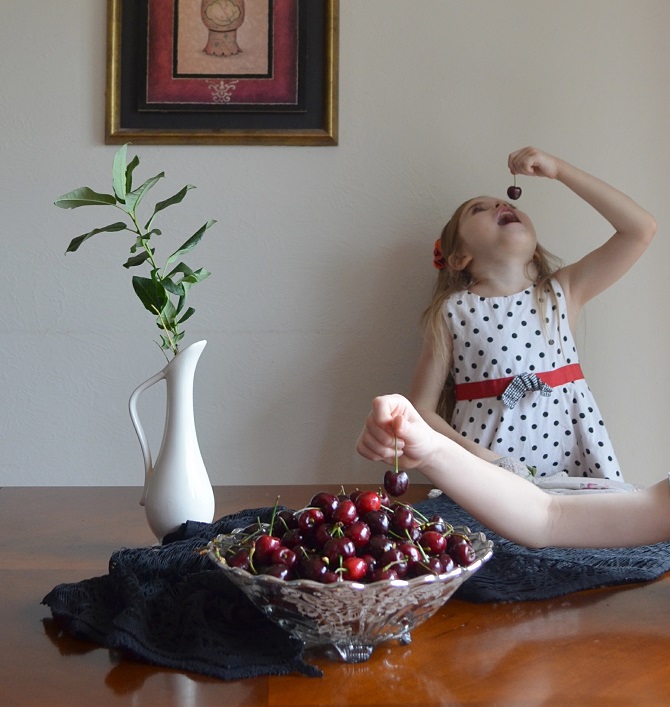 I haven't thought of that poem about the cherry tree for a while.  Things have been so busy around here these days.  The book sits on the shelf gathering dust - waiting, along with all the other books I promised myself I'd read again.  Someday.  Time ticks on, and still they sit.  Patient.  Unopened.  Sleeping.

I know it's been a while since I wrote my last blog post.  In the spring when it was raining and still cool enough for soup.  Again, time escapes me.  I grasp at it, but it's always just beyond my reach.  But today I found something in the yard that changed all that.  Something that surprised me, though it shouldn't have, and reminded me of those sweet poems we used to read together at night.


See, I go a little crazy during cherry season.  I love to have a big bowl of them on the kitchen table all summer long.  I can't help myself...  Red, juicy, sweet and tart.  They're as much a work of art and part of the decor as they are a handy little snack for the kids as they come and go from the yard, the screen door slamming shut behind them.  They stand on the deck, those two, and spit the seeds way out into the grass (-Who can make it the farthest?-) before running down the stairs to play.  They are still children, after all! 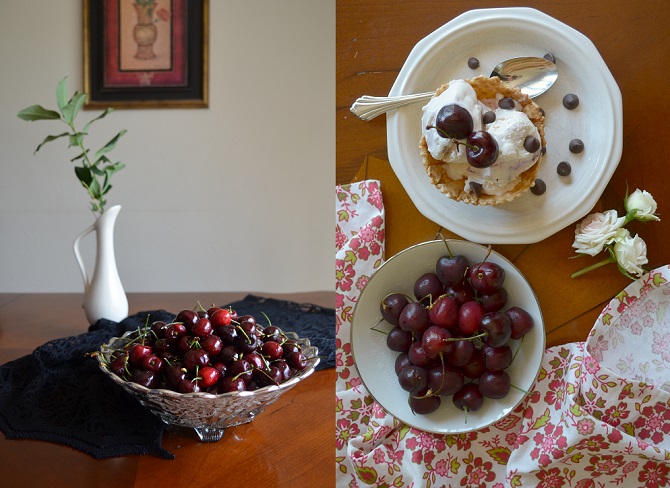 This morning, as I was clearing weeds, I found a tiny cherry tree growing up under the stairs of the deck!  The child of last year's seed that was meant to travel farther into the grass but landed in the sheltered spot below the second step instead.  I nearly pulled it out, but something stayed my hand.  There, among the thistle and ragweed, soft green leaves on a tender stalk reached up through the slats of the stairs toward the sunshine.  I didn't have the heart to dig it up, but when I do I'll plant it in a spot that gets loads of sunlight.  I've always wanted a cherry tree!

And speaking of cherries, I've been dreaming of this ice cream since they started showing up in big baskets in the front of the markets a few weeks ago.  Every week I bring some home, intent on creating a cherry syrup to be swirled into vanilla ice cream, but each time they disappear faster than I can cook them!  I finally set some aside and made the ice cream last Saturday when family came to visit.  We served it on brownies, topped with our favourite Guittard chocolate chips, which are peanut free, by the way!

Now that we're easing into summer and things have slowed down just a bit, I think I'll finally pull that book off the shelf - you know, to ease the growing pains that the passage of time so often causes.  Maybe I'll keep it next to my bed, a refuge from the ever changing world outside.  Because, though time hurries on (and the kids keep growing just like the tree under the stairs), the poems in that book remain timeless.  And that, I have to admit, is a very comforting thought. 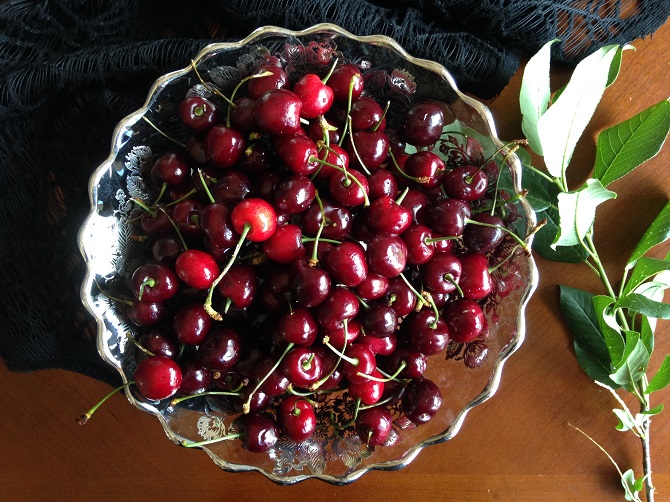 To make the ice cream base, whisk together the sugar, milk, vanilla and salt.  Stir until the sugar is dissolved in the milk.  Whisk in the cream and place the mixture in the refrigerator for at least one hour to chill.

While the ice cream base is chilling, make the cherry swirl.  Wash the cherries and remove the pits.  Place in a small sauce pan.  Add the water and sugar and bring to a simmer.  Simmer for 10 - 12 minutes until thick and syrupy, using a fork to stir and mash the cherries as they become soft.

Pour the cherry syrup into a bowl and cool to room temperature.  Place in the fridge and chill thoroughly before making the ice cream.

Churn the ice cream base in a 1.5 qt ice cream maker, according to the manufacture's directions.  When the ice cream is done, place it in a chilled, freezer-safe bowl.  Add the cherry syrup and quickly fold (swirl) it in with a few quick strokes.  Cover the ice cream and place in the freezer until set.

Garnish with chocolate chips and fresh cherries just before serving. 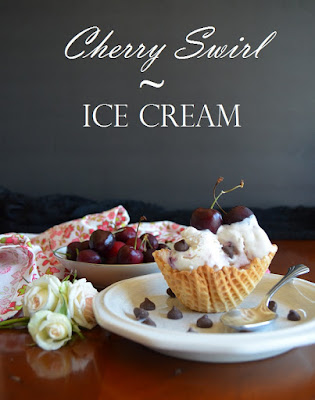