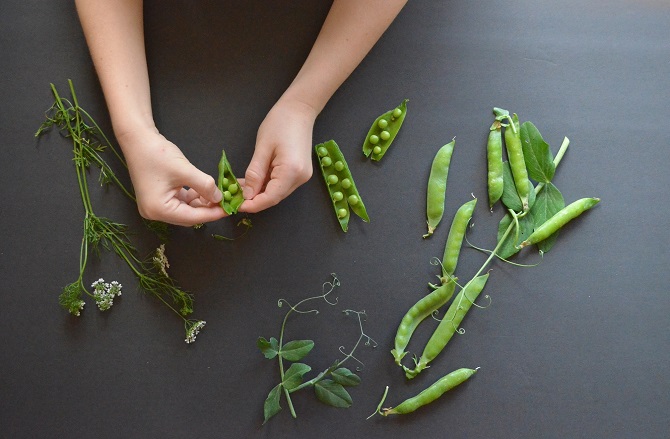 Isn't it funny how some memories fade as we grow older, while others continue to grow stronger as the years go by?

They tell me I was a bit of a trouble-maker growing up.  But in my defense, as a child of an artist, rules are meant to be broken.  We used to visit my grandparent's old house on the edge of town every Sunday.  I've written about those visits often.  There were three of us kids- my brother, my cousin and myself.  The Three Amigos.  I was the oldest and therefore the ringleader.  We would run like wild animals through the woods to the north, and though we were warned not to, we'd climb to the tops of the huge pine trees that grew there, sap sticking to our hands like burnt caramel.  They tell me I once fell from one of those trees.  I have a long scar on my right forearm to prove it.  But I don't remember.

There was a loft in that old house, 16 feet above the living room.  Building codes didn't exist when the house was built, and the banisters were placed just far enough apart for a child to easily fall through.  The three of us would hang like monkeys from the banisters and swing to the winding staircase below.  They tell me that my cousin once broke her arm in an ill-fated swing from too far away.  But I don't remember. 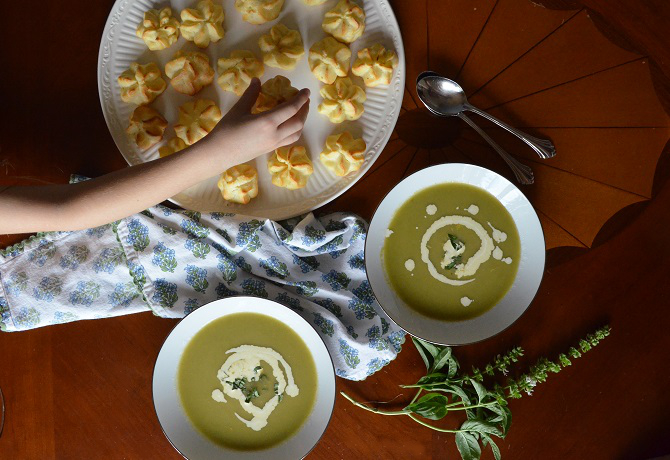 Just past that treacherous staircase, at the end of a dimly lit hall, stood a closed door.  I knew I shouldn't, but when my grandmother was busy in the kitchen (which she always was) and my grandfather was working in the garden (which he always was), I would creep down that hall, quiet as a mouse, crack open that door and slip inside...

Stepping through that doorway was like stepping into another world.  I remember it as clear as a photograph.  The room was bright and airy with blue carpet, and the breeze from the open windows blew the seersucker curtains in the corner.  A small, neatly made bed sat against one wall.  Directly across from it stood an arm chair from the 40's, upholstered in blue and white damask, next to an antique dressing table with claw-feet.  On that table, resting on a lacy, white handkerchief, was a polished silver tray that sparkled in the sunlight.  It held just a few precious items: a small hand mirror, a simple silver comb and perfume, decanted into a bottle with a glass ball stopper.  If she was feeling fancy, there might also be a tube of lipstick (Stormy Pink by Revlon) and maybe a bottle of nail polish (Old Rose by Cutex).  I used to look at my reflection in that old mirror, my face marred by the time-worn glass, and trace my finger along the dainty edges of  the perfume bottle.  Filled with a golden potion, it beckoned me to gently lift the stopper for just a second and breathe in the heady aroma.

As a child of the 80's, when big hair reigned supreme and the girls' restroom at school reeked of a sickening mix of White Rain hairspray and Malibu Musk, I was fascinated that my grandmother could pull herself together with so few items.  But she was a child of the 20's, came of age during the great depression, and Simplicity was the name of her game.  We couldn't have been more different. 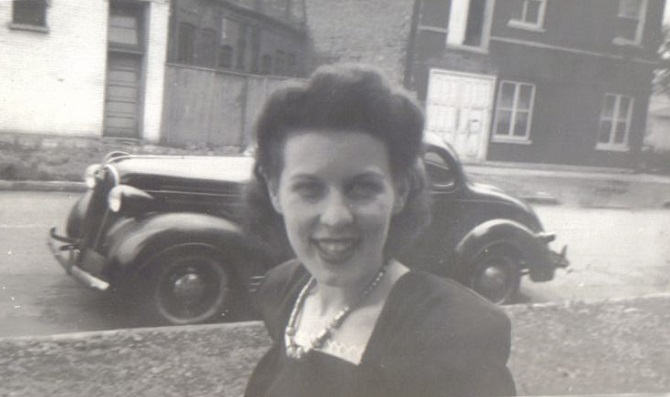 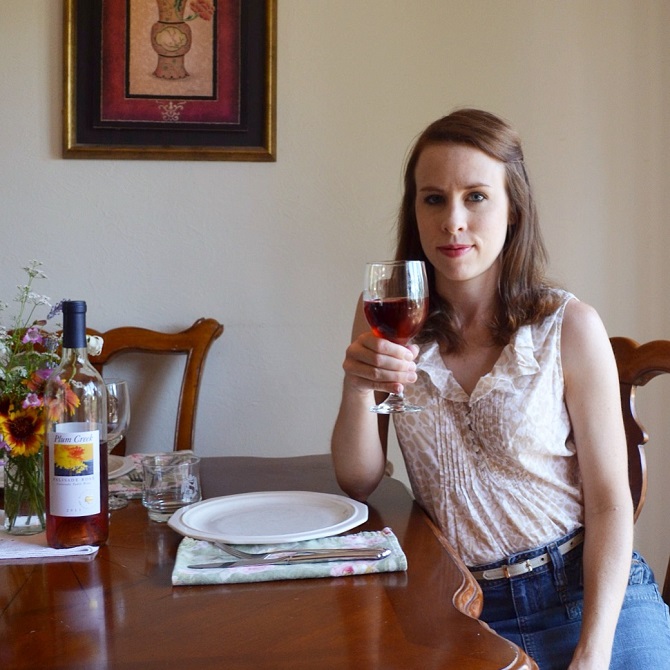 I took the hand mirror from her house after she died, and the bottle of perfume, too.  I don't remember what it was called, but there's magic in that bottle.  Like a time machine, to this day if I remove the lid and close my eyes, I'm a kid again.  Illicitly standing in her bedroom, tracing my fingers along the cool bottle.  I can almost feel the wind rustling the dusty curtains like a ghost.  How vivid the memory remains!

They recently told me that the older I get the more like my grandmother I become.  It was on the Fourth of July, actually, and I was on edge, sitting by the open window and flinching at every sound from outside.  I have an irrational fear of loud noises, stemming from some traumatic childhood event which, as you may have guessed, I don't remember.  My grandmother was also plagued by uncontrolled, irrational fears.  I took this comparison as a complement, though the field of reference was questionable! 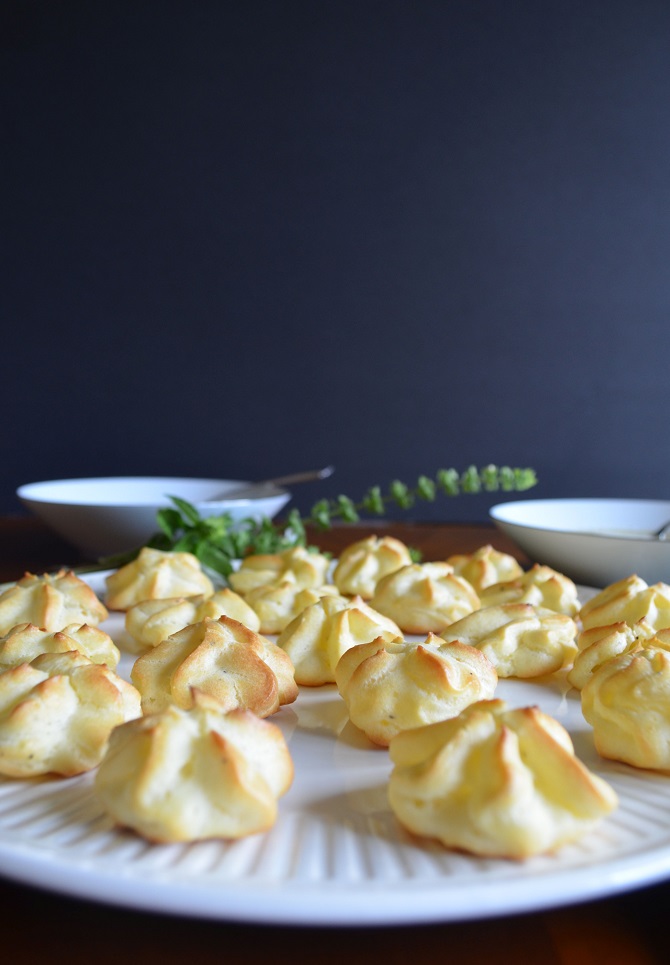 I like to think that if I can pass along to my children just one piece of the puzzle that made her tick, then I'll have succeeded.  Yes we came from two vastly different eras and my memories of her are fading with the years, but this single memory remains clear, a beacon on a foggy night.  And her untaught lessons on simplicity without compromise are ingrained into the very fiber of my being.  The older I get the more apparent it becomes.  Not only did she embrace Simplicity in her beauty routine, but it was also the driving force in her kitchen, as it is in mine. She taught me to start with the best, keep it simple and the rest will take care of itself.  The finest ingredients are best treated in the simplest of ways.

Perhaps one of these days I'll be able to pare down my lipstick collection to just one!  But for now I'll share some of my favorite simple, summer recipes.  No long list of ingredients here, no fancy equipment needed, just the basics.  A wooden spoon and a sauce pan, and if you're feeling fancy, maybe a star-shaped pastry tip.  I'm sure she would have approved.

This recipe is my simplified interpretation of Julia Child's pea pod soup.  In hers, she cooks the pea pods until soft enough to puree.  I've always found that the peas from my garden are just too fibrous, so I use sugar snap peas with tender pods in addition to garden peas.  I love this combination and the pods are tender enough to puree smoothly.

Remove from the heat and puree, either with an immersion blender or in a conventional blender, until smooth.  Taste for seasoning.  Allow to cool slightly and then chill until ready to serve.

When ready to serve, stir well, garnish with a sprinkling of fresh basil and a drizzle of fresh cream.

These were inspired by an amazing meal I had at The Kitchen in downtown Denver last spring.  The goat cheese gougères were served with the smoothest roasted tomato soup.  The combination was amazing.  I added a good dose of black pepper to mine because it pairs so well with goat cheese, and used a large star-shaped piping tip because I like the crispy nooks and crannies it creates, but feel free to leave this step out (in the name of Simplicity).  They're just as good dolloped by the tablespoon onto the baking sheet and baked 'til golden.  Serve them with the cold pea pod soup above, or alone with a chilled Rosé!

Combine the milk, butter, salt and pepper in a large sauce pan.  Bring just to a boil.  Add the flour and mix vigorously with a wooden spoon.  Cook, stirring constantly for 2 minutes.  The dough will come together in a ball as it cooks.

Place the dough in a mixing bowl and allow to cool for a minute.  Beat in the eggs one at a time.  The dough will appear to separate but will come back together by the end.  Quickly beat in the crumbled goat cheese.

Place in the oven and immediately turn the temperature to 375 F (190 C).  Bake for 20 - 22 minutes until golden brown, rotating the pans halfway through.  Serve warm. 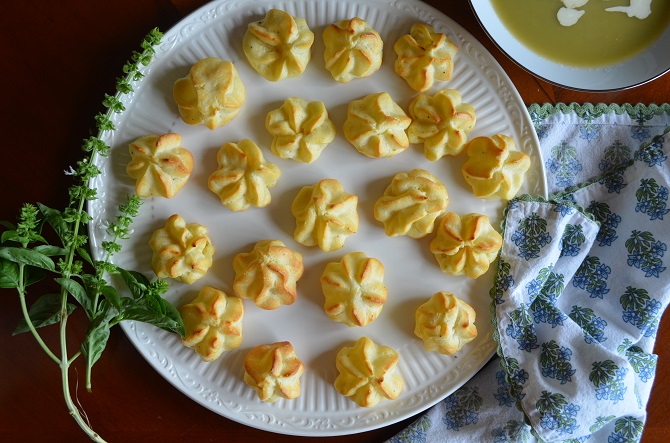