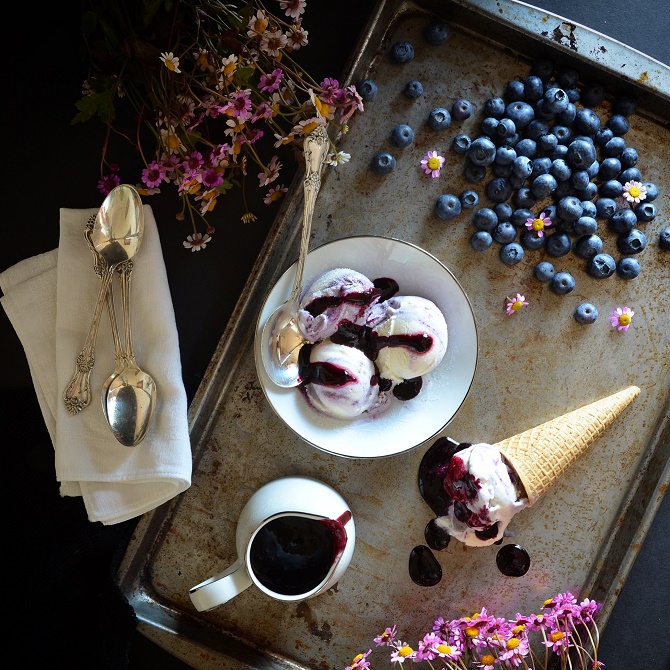 To say last week was hot is like saying the ocean is wet.  "Hot" doesn't even come close!  Sizzling, scorching, sweltering are better.  The kids even began contemplating solar science experiments.  For instance, if a red and a yellow crayon are left in the cup holder in the car, what color will the resulting ooze be the next morning?  Or, if placed in the sun, how quickly would my cast iron skillet reach a temperature hot enough to cook an egg?  And once preheated, how long would it take to fry that egg using only the searing heat of the sun and a little butter?  In the end, though, it was just too hot to venture outside for that.  We decided to make ice cream instead, which we all agreed was preferable to a fried egg.


In fact, we've been making so much ice cream these days that the machine hardly gets a rest.  No sooner have I coiled up the cord and tucked it away in the cupboard than I'm pulling it back out again and setting it on the counter for another batch.

I love making ice cream, and since most of the ice cream sold in stores isn't peanut-free or safe for Eva, it's our only choice.  And not a bad one, at that!  Most of the time it's vanilla, to dollop on brownies and to scoop into my morning coffee.  But sometimes we get adventurous, adding fruit syrups, sunflower butter and seeds, or even olive oil and sea salt. Okay, I admit it's not that adventurous, but when it's sizzling, scorching and sweltering outside it's all the adventure we can muster.  Looking forward to cooler days ahead, cleaning out the cup holder, but most of all, more ice cream.

(P.S.  The cone in the picture is from Joy Cone Company.  It's gluten-free & made in a peanut/tree nut-free facility.  Win-win!)

Make the syrup first by mixing the blueberries, 5 TBSP of sugar and the lemon juice in a small sauce pan.  Bring to a simmer and cook until the blueberries start to fall apart.  Mash the blueberries with a fork, then strain through a fine mesh sieve into a bowl.  Push as much of the juice as possible through the sieve.  Cool and then refrigerate until ready to use.

To make the ice cream base, whisk the milk and sugar together in a large, freezer-safe bowl.  Whisk in the vanilla, salt and cream.  Cover and refrigerate for at least one hour or until very cold.

Add the ice cream base to the ice cream maker and churn according to manufacturer's directions.  For mine, this is 20 minutes.  While the ice cream is churning, place the bowl in the freezer.