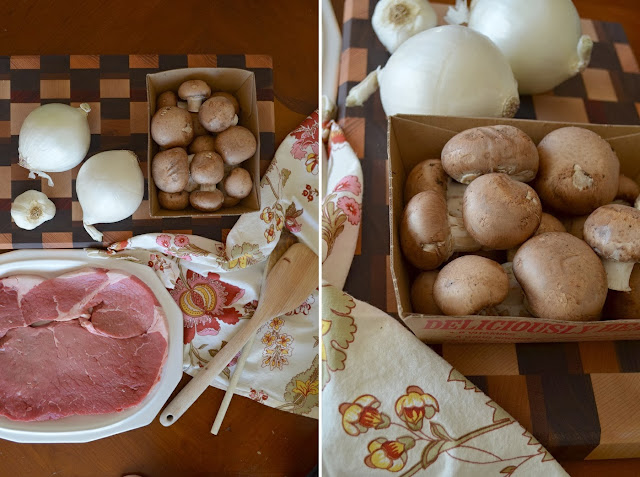 (this gorgeous cutting board was handmade by Karl Driesel)

We make a big deal of the new year's day feast.  After all, it's the first big meal of a year full of promise, opportunity, and fresh resolve.  It makes sense to start it off on the right foot, with a full belly.  But we don't often think of the last meal of the year, and since I'm not one for new year's resolutions, it only seems right to send the old year off in style, as well.  Like the last, extravagant meal of a condemned prisoner, shouldn't the last meal of the year be just as lavish, just as self-indulgent?  I can almost hear the funeral march playing in my mind as I plan the menu.  Perhaps I'm being morose?  I do tend to feel a bit somber at the passing of yet another year.  Maybe a better way to approach the last meal is in the spirit of survival.  It's a feast - hearty and rich - that's fit to keep us warm and satisfied through the parties, soirées, and celebrations that bridge the gap between old and new.  Something to satisfy and sustain us until a new sun rises on 2014.  Yes, I think that's a much better way to look at it, don't you?

This year my new year's eve feast is Russian inspired.  After all, who better to turn to when looking to stay warm and cozy this time of year, than the Russians? 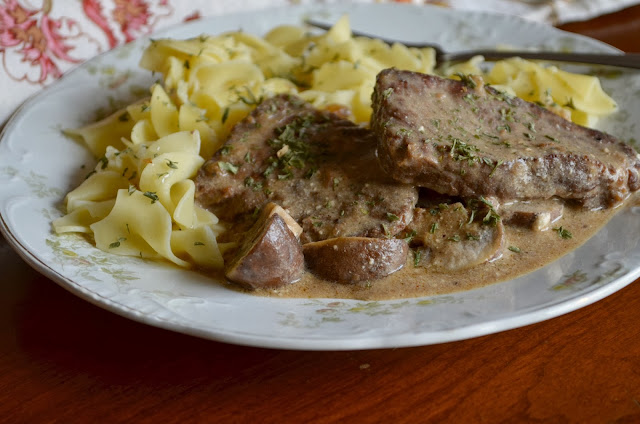 The holidays have me spinning!  Family visiting, so much good food, and four generations of cooks in the kitchen . . .  at the same time!  For Christmas Eve we had a decadent lasagna with a tender Mâche salad and cookies of all sorts - gingersnaps, sugar trees, biscochitos, rum raisin balls - meant for Santa, of course.  I was dreaming of goose for Christmas dinner, but with the hustle and bustle of the holidays I didn't get to the market until Christmas Eve, and there were none to be found.  As we strolled up and down the aisles - my mother, my grandmother, and I - the inspiration started flowing.  We decided on the traditional ham, slathered in a fresh pineapple and brown sugar glaze.  Along side, we served Ina Garten's Brussels Sprouts Lardons (my kids fight over how many servings they can eat of these!), roasted new potatoes with fresh rosemary, and a light fruit salad with honey-vanilla yogurt dressing.  For dessert, a stunning yule log - flourless chocolate cake, wrapped around a cream cheese filling, and garnished with a thick cherry sauce.  Alas, I didn't go so far as making the tiny, candy mushrooms to grow on the log.  Maybe next year. 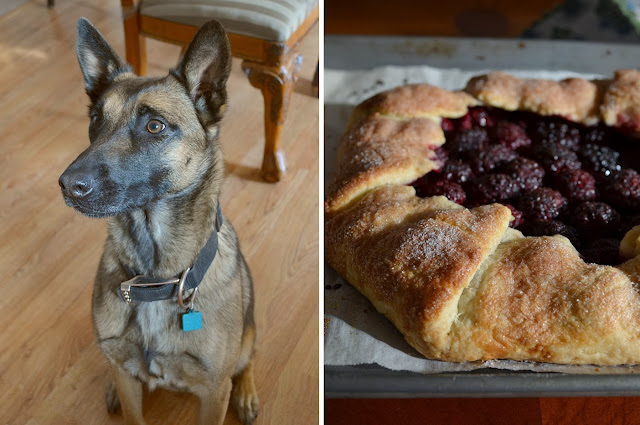 Even the dogs are getting fat.  They lie at my feet like furry logs while I'm in the kitchen.  Never mind that I trip over them every few minutes.  They don't budge.  And they've learned to bat those big brown eyes at my kids in such a way that they just can't resist dropping a scrap or two.  On accident.   I believe my husband has even contributed covertly, under the table, though I have no solid proof as of yet.  In any case, their round tummies and sparkling eyes show that they're enjoying the holidays just as much as the humans. 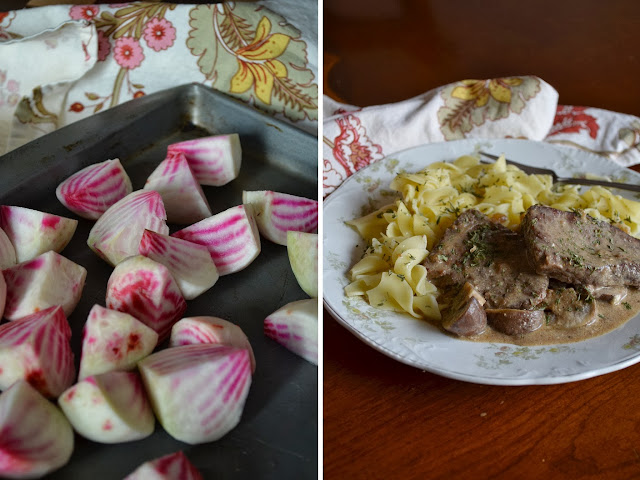 Of course, as always happens at Christmastime, I took a thousand photos, and didn't manage to get any of the food!  So the recipes will have to wait for another post.

But, for today, I'll share with you what I'm planning on serving new year's eve.  The last meal of 2013.  I can hardly believe it!  Slow cooker beef stroganoff with brown butter egg noodles, five-spice roasted beets and carrots, baked brie with honey, a grand salad, and a rustic cinnamon-blackberry galette.  All simple and easy.  Because a feast doesn't need to be complicated and, let's face it, you have better things to do on new year's eve than to cook and wash dishes.  Right? 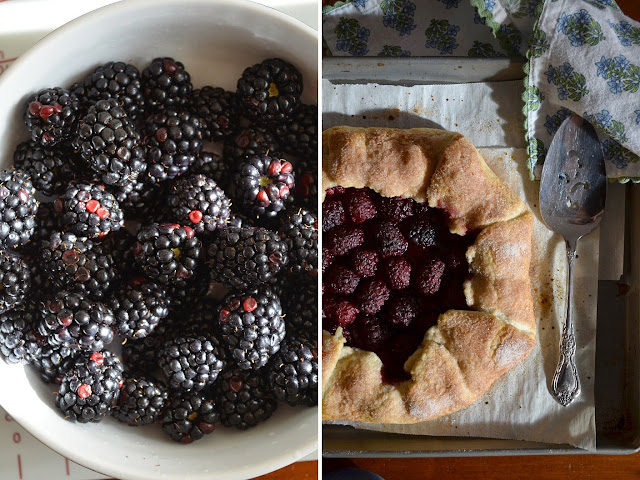 Turn your crock pot to low to begin preheating.  In a large pan over med-low heat, melt the butter and 1 tsp olive oil together.  Add the onions and a large pinch of salt and cook, stirring occasionally until the onions begin to caramelize (about 20 minutes).  Low and slow is the key to great caramelized onions.

Meanwhile, mix the flour and paprika together.  Season the meat with salt and pepper, and dredge in the flour mixture.

When the onions are nicely browned, add the garlic and cook 2-3 minutes longer.  Spread the onions and garlic evenly into the slow cooker.

In the same pan, add another tablespoon or two of olive oil and brown the meat in batches.  When the meat is brown place it on top of the onions in the slow cooker.  (If there is any flour leftover, pour it into the pan to brown along with the meat.)  When all the meat has been browned, pour the wine into the pan and bring to a simmer.  Add the stock and stir, scraping up the browned bits from the bottom of the pan.  Pour this sauce over the meat in the slow cooker.  Cover and cook on low 6 - 7 hours, or high 4 - 5 hours (or until the meat is very tender).

One hour before serving stir in the mushrooms and sour cream.  (The mushrooms will add a lot of water to the sauce, so don't be tempted to thin it out beforehand.)  Cover and turn the heat to high.  Cook for an additional 45 minutes.  Garnish with parsley and serve with brown butter egg noodles. 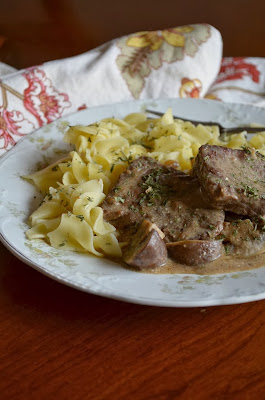 Preheat the oven to 375 F (190 C).  Wash and peel the beets and carrots.  Cut the beets into quarters and cut the carrots into large chunks, roughly the same size as the beets.  Place them on a rimmed baking sheet and drizzle with the oil.  Sprinkle with the 5-spice powder and a large pinch of salt.  Toss with your hands and spread evenly.  Bake 45 minutes, stirring half way through.  Place the roasted beets and carrots in a serving bowl and garnish with the butter, parsley, and a pinch more salt (if needed). 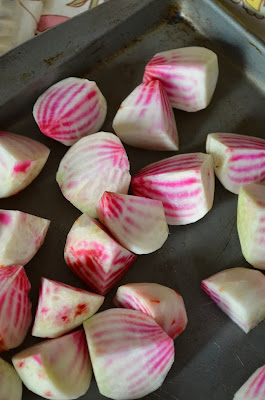 Make the pastry by combining the flour, 2 tsp sugar, and salt.  Using a  pastry blender, cut the cold butter into the flour until it resembles moist sand.  Add the cold water and mix quickly until the dough comes together.  Shape the dough into a disk and wrap in plastic wrap.  Refrigerate for at least 1 hour.

Preheat your oven to 400 F (200 C).  Roll out the chilled dough on a floured surface to slightly larger than 12 inches round. Transfer to parchment lined sheet pan.  Place blackberries in a bowl and toss gently with the lemon juice.  Spread the berries in a single layer in the middle of the pastry dough, leaving approx. 1.5 inches of crust around the edges to fold over.  Mix together the cinnamon and sugar.  Sprinkle about 2/3 of the sugar mixture on blackberries.  Fold the crust on top of the berries crimping as you go along.  Brush the crust with a little milk and sprinkle with the remaining sugar.  Bake 30 - 40 minutes until the crust is golden brown and the berries are bubbly.   Serve with freshly whipped cream. 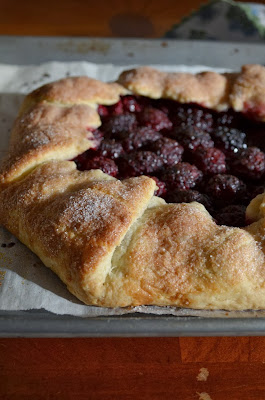