Entering a New Year with Posole


Posole.  Where do I begin?  It's an ancient dish, mysterious and grandiose with enough history behind it to write a book.  An Aztec stew from pre-Colombian Mexico.  It was eaten in times of religious celebration when corn was scarce.  At those times, the sacred, dry corn was treated with lye until the kernels became puffy and tender.  The treated corn, called hominy, was then stewed with the meat of human sacrifices.  When cannibalism was outlawed by the Europeans, pork replaced the human meat because, according to the Aztecs, the taste was very similar . . .

Disturbing?  Slightly.  But don't let that deter you from trying this festive stew.  It's thick, luscious, and spicy.  Perfect for a cold January evening, which is one of the reasons Posole has been part of our traditional New Year's day feast for as long as I can remember.  I make my Posole from a time-worn family recipe, passed down through the generations.  Of course, I've modified it throughout the years - my grandmother cooks hers in the slow cooker; my mother uses dry hominy and simmers it for hours until it's just the right consistency; I like to use canned hominy for the same reason I prefer canned beans - the silky, smooth texture - and I omit the jalapenos altogether as they just don't suit my children's tastes at this time.  But the essence, the spirit, of the recipe remains the same: a warm, hearty, celebratory stew for any winter occasion.

Season the pork with salt and pepper.  Heat the oil in a large, heavy dutch oven.  Brown the pork (in batches if necessary).  Add the onions and garlic to the pot with the pork and cook until soft.  Add the green chilies, jalapenos, oregano, thyme, salt, and chicken broth.  Bring to a simmer.  Cover and cook 2 1/2 to 3 hours.  Stir in the hominy, cover and simmer for an hour longer.  Taste for seasoning.  Serve with red chili sauce to garnish.  Serves 6. 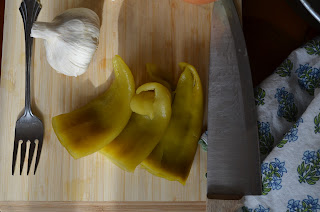