It was once thought that echos were the voices of spirits calling to the living from within the rocks...


Some Native American cultures believed that a Shaman could visit with these spirits in stone, or manitous, as they were called, by leaving his body and passing through the solid surface of the stone.  Once inside he could trade with the spirits for tobacco, herbs, paint and medicine.  It was risky business - communicating with the stone spirits.  For if the shaman failed to carry out the ceremony correctly he'd become trapped in a prison of stone, leaving the shell of his lifeless body outside. 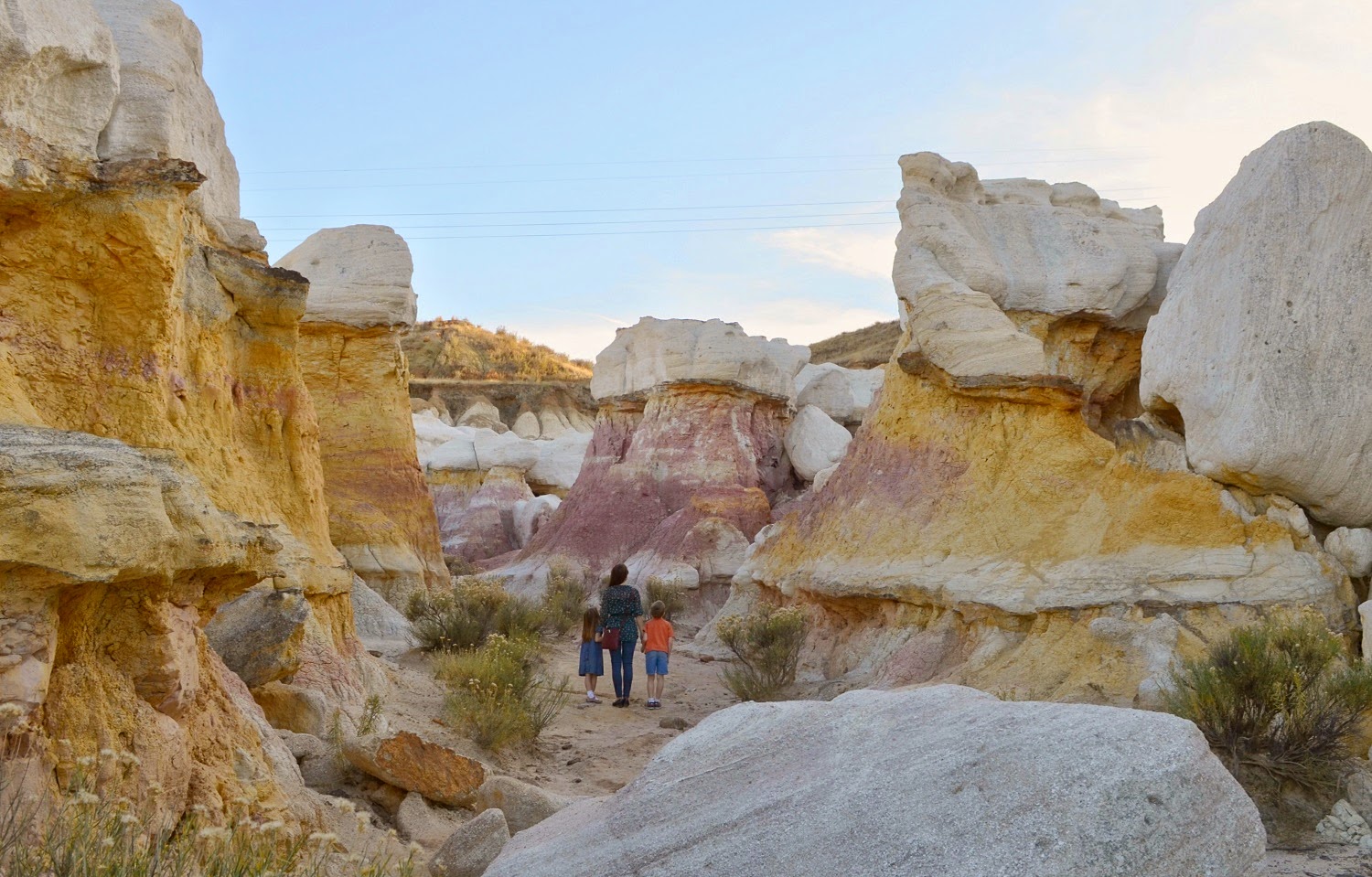 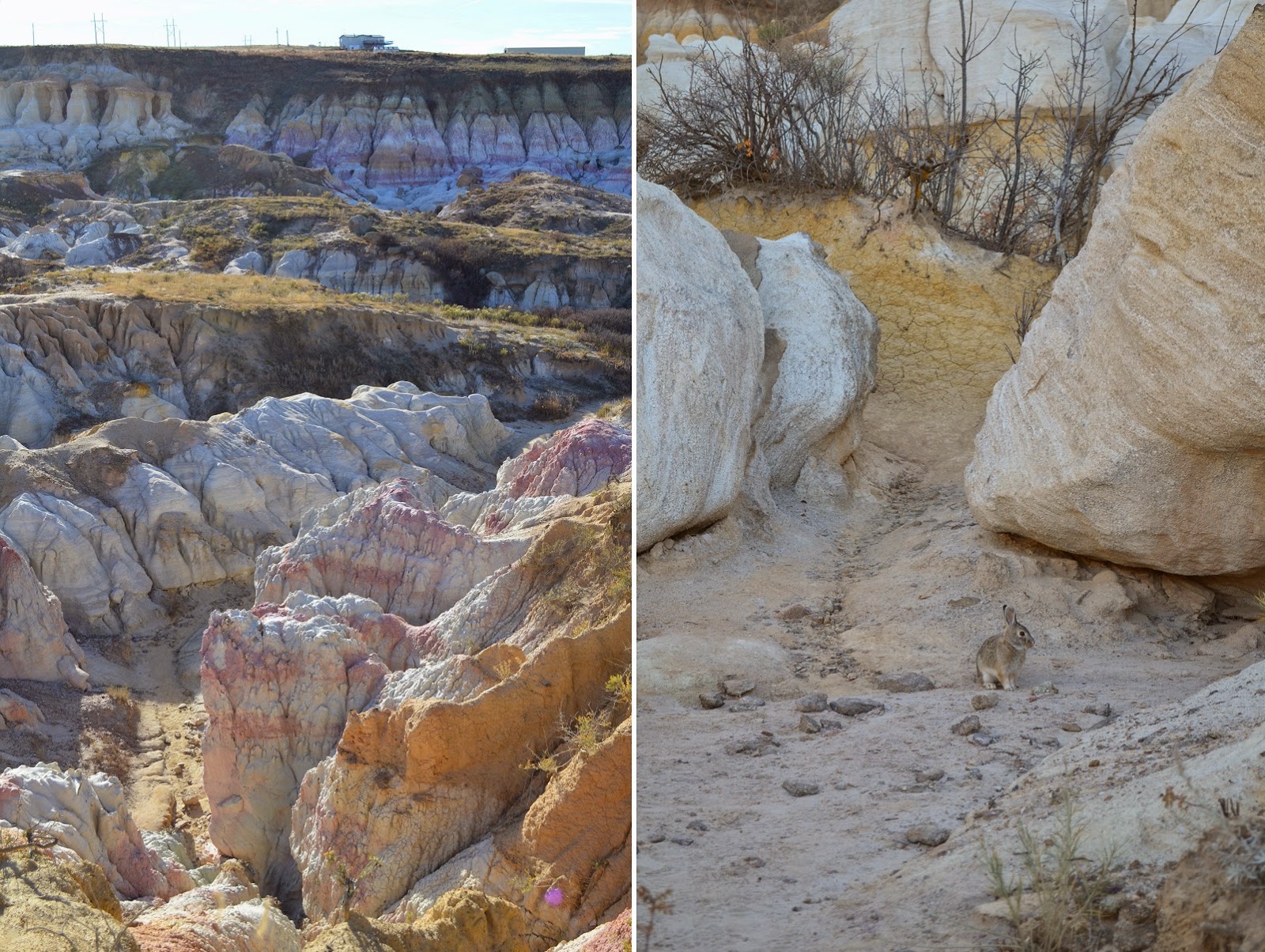 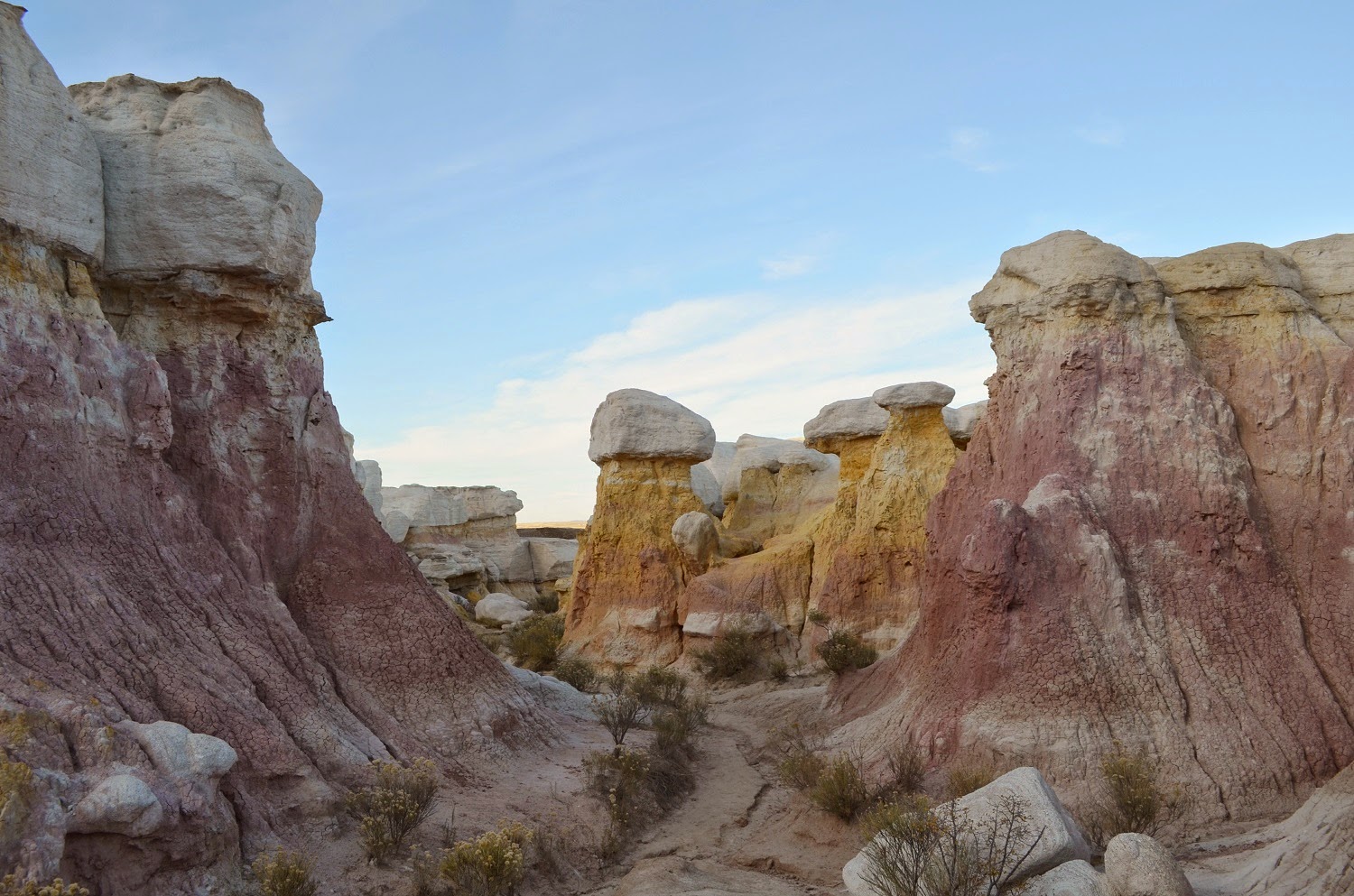 A few weeks ago we found ourselves here, among the spirits of the stones.  It's a little know place, off a dusty dirt road, about 25 miles outside of Colorado Springs.  Locals call it The Paint Mines.  It's a fascinating study in geology.  In a depression on the plains at the foot of the Rocky Mountains, richly coloured clay spires, capped with rugged sandstone hats, create a labyrinth of gullies and gulches.  Archaeological evidence suggests that humans have inhabited the Paint Mines for over 9000 years!  Striations of vividly coloured clay stretch across the stone pillars in layers- ochre, aubergine, and rose.  They were used to make ceremonial paint and to create and paint pottery, hence the name The Paint Mines. 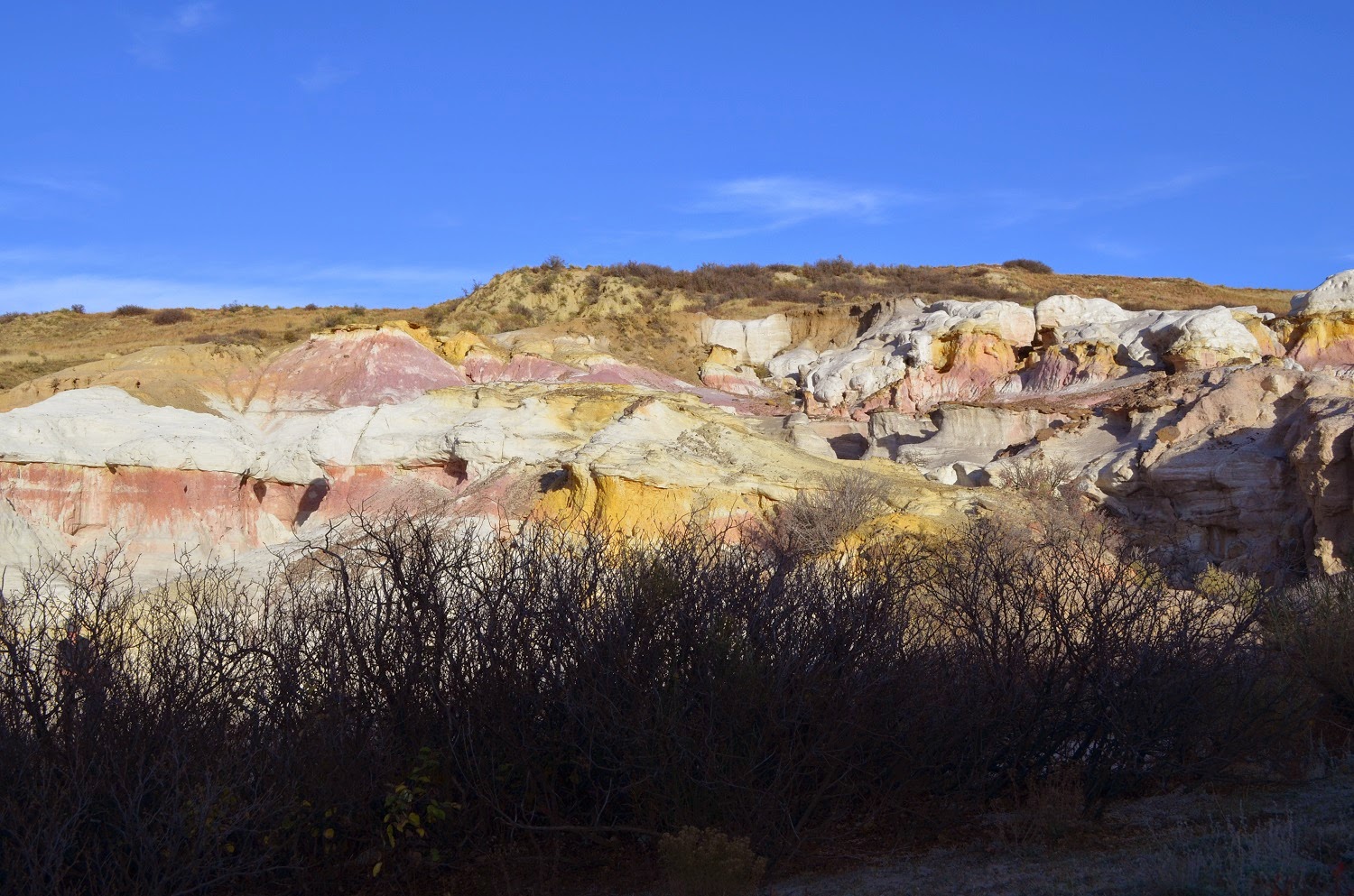 With such a fascinating history, if spirits live anywhere it must be here.  The air is so still.  The quiet is almost deafening.  You begin to question if the sounds you do occasionally hear are real or just figments of an overactive imagination.  An echo.  The sad, distant call of a coyote.  The haunting moan of the wind as it passes like a ghost through the caves and among the spires.  The voice of a manitou, or perhaps a shaman, trapped in the purple stones forever?  You could get lost in the silence if it were not for the faint rustling of rabbits in the bushes (there are hundreds of them!) 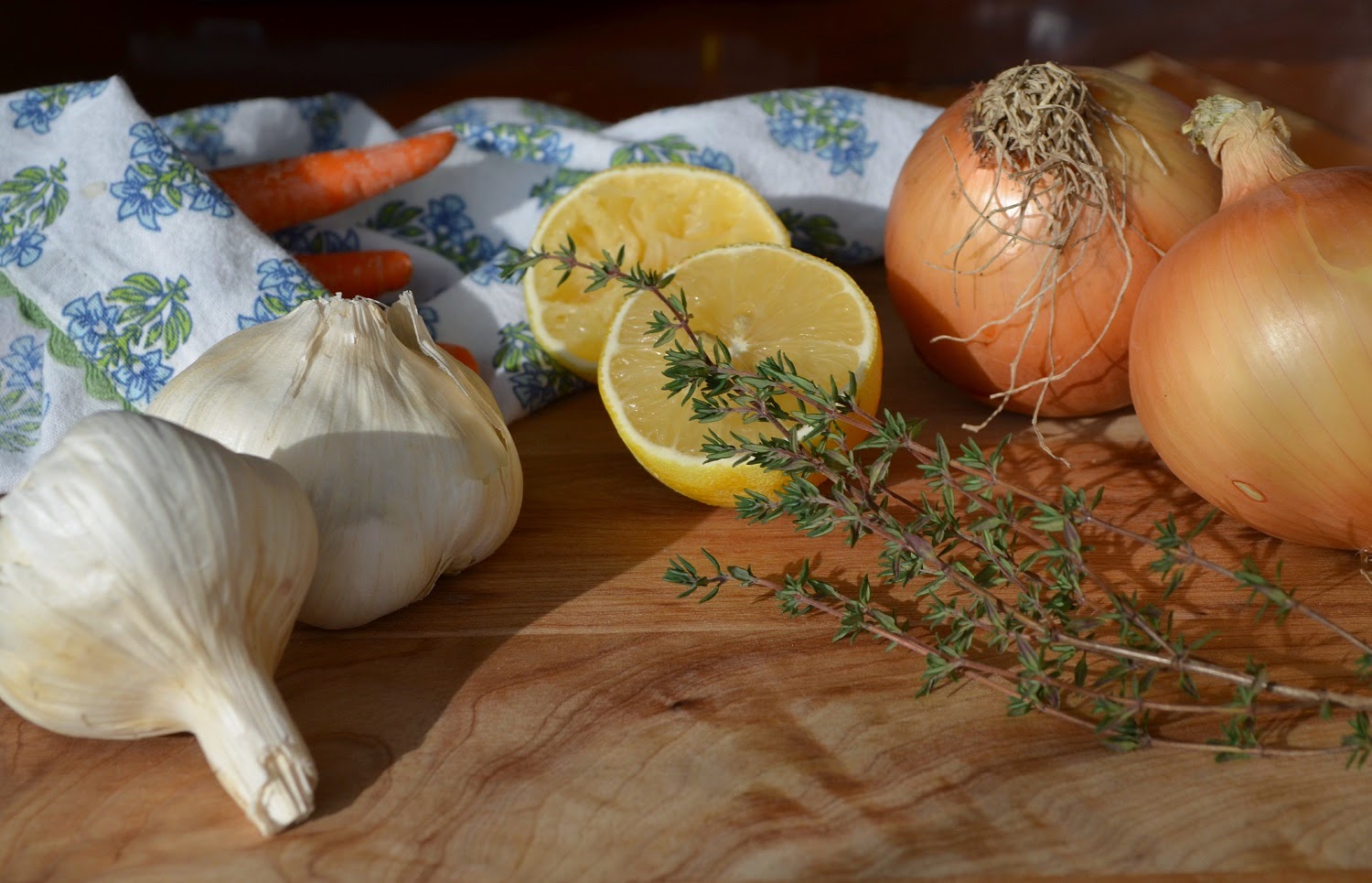 After a day of contemplating the spirit world, it's nice to have something warm and tangible to come home to.  Most often, for us, that means something in the crock pot that's waiting when we get home.  Or soup.  Always soup!  My grandmother always had a pot of soup at the ready.  Whether it was simmering on the stove, stashed in the refrigerator, or tucked away in the freezer.  Here I've combined the best of both worlds; a slow cooker chicken stock recipe that's made with the raw, leftover bones of a chicken, simmered all day while you're away, and a quick, hearty, old fashioned chicken and rice soup with thyme and lemon.  A classic combination!  I love to make this soup with starchy, short-grained rice such as arborio or sushi rice because of the viscosity it adds to the broth, but feel free to use any white rice you have on hand.  If you'd prefer to use brown or wild rice, let the soup cook for approximately 20 minutes longer.  Though not my grandmother's recipe - I don't think she ever followed a recipe - this soup is reminiscent of some of the many she would make. 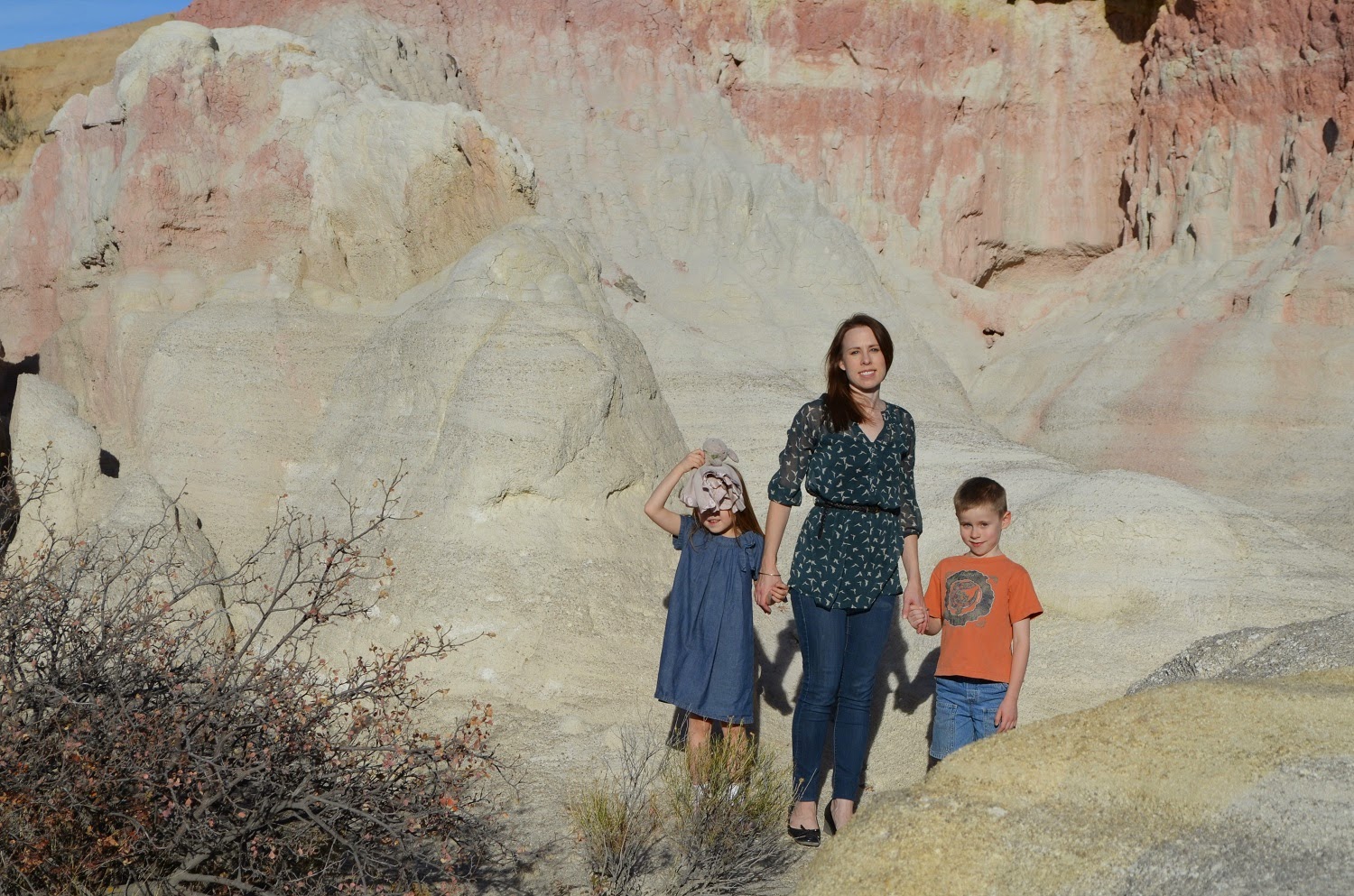 The Paint Mines are located off of Paint Mine Rd in Calhan, CO 80808

Slow Cooker Chicken Stock
Whenever I cut a whole chicken into 8 parts, I save the leftover carcass to use for stock.  Here's a  simple way to cook it in the crock pot.

To remove the impurities, place the chicken in a soup pot and add cold water just to cover.  Bring to a boil on the stove and let simmer for 5 minutes.  Remove the chicken from the water (which will now be cloudy and foamy from the impurities) and place it in a large slow cooker.  Discard the water in the pot.

Add approx. 8 cups of clean, boiling water to the crock pot. Cut the onion in half and press the clove into one side of it.  Peel the carrots and cut them into large pieces.  Cut the celery into large chunks and crush the garlic.  Add all the veggies to the crock pot, along with the bay leaves and a large pinch of salt and pepper.  Cook on high for 5 hours or on low for 7 hours.

Remove the chicken from the broth and let cool.  Strain the broth into a large glass bowl, cool and refrigerate or freeze until ready to use.  Remove any meat that remains on the carcass and save for the soup or another dish.

Heat the butter and onions together over medium-low heat.  Cook, stirring occasionally until the onions are soft but not brown.  Add the garlic, carrots, and potato and cook a few minutes longer.  Add the flour and stir to coat the vegetables.  Cook for about 5 minutes longer.  Add the sprigs of thyme (the leaves will fall off while cooking and you can remove the sprigs when ready to serve).  Vigorously stir in the chicken stock to remove any lumps, and bring to a simmer.  Add the chicken meat and sprinkle the rice over top.  Stir and cover.  Simmer for 25 minutes.  Remove from the heat and add the juice of half the lemon and approx. 1/2 tsp lemon zest.  Season well with salt and pepper and serve. 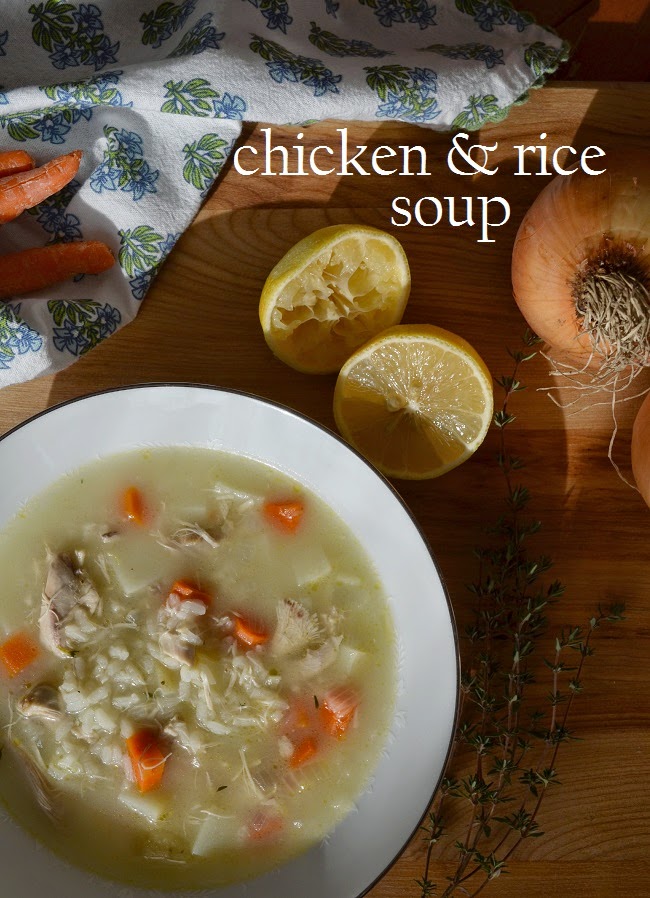