A Tale of Three Oranges 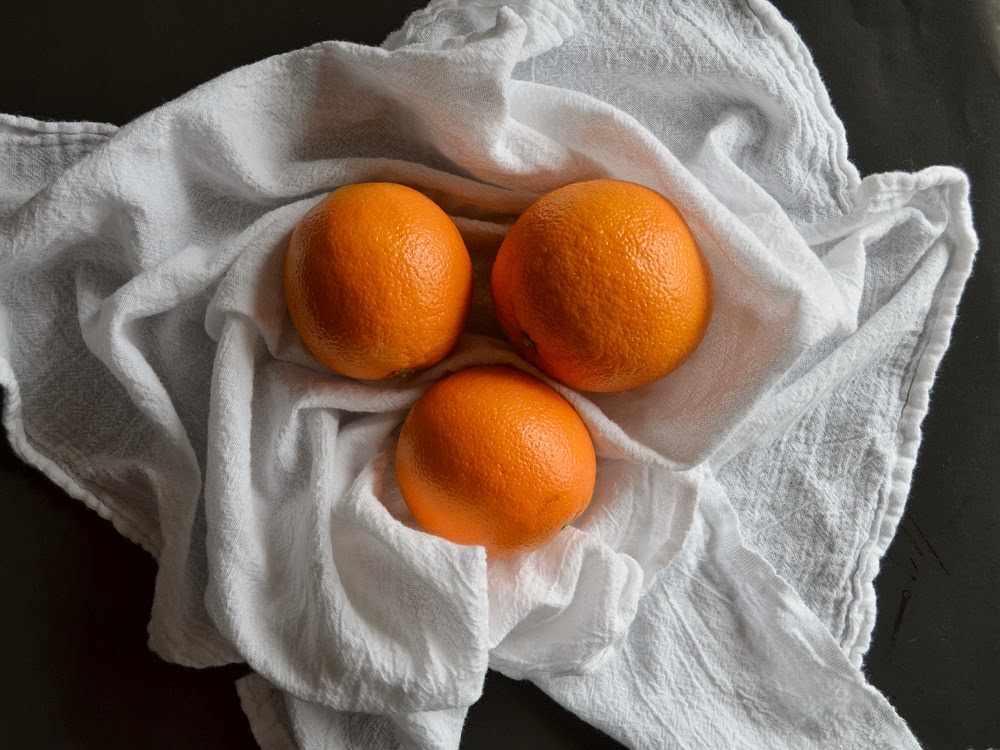 Long ago, in a palace on a hill, there lived a young prince who was very unhappy; he neither laughed nor smiled.  One day, a cunning witch set out to make him laugh.  For she was intent on marrying the stoic prince and becoming queen.  She dressed in her finest gown - a robe as colourful as the wildflowers in April.  Tiny bells, sewn into the lining of her skirt, chimed in rhythm with the sway of her hips.  In the palace courtyard, when the sun at its highest, the beautiful witch began to dance.  Upon hearing the bells and seeing the flashing colours of her dress in the sunlight, the prince came to his window to watch.  But, with each twirl, a silver thread which held one of the bells began to unravel and soon the bell came loose and fell to the ground.  The witch didn't notice and slipped on the bell, tumbling to the ground in a heap, her rainbow skirts billowing up around her like a cloud.  The prince, having never seen anything so funny in all his life, burst into laughter.  He laughed so hard that tears streamed down his face.  In amazement, the people of the palace stared out their windows and doorways at the witch.  For they had never heard their prince laugh.

The witch, quickly becoming enraged, stood and yelled in anger to the prince, who was still giggling in the most childish of ways, "Because you have laughed at me, I place a curse over you!"  Suddenly the prince felt a heavy sadness sink into the very depths of his heart.  "You will never again laugh... unless you find the three oranges,"  In a swirl of light and color she marched out of the courtyard, the bells tinkling behind her in the most melancholy way...

It's a bedtime story I heard many times as a child.  Like a pot of soup made with a little bit of this and a little bit of that, it's based on the classic French tale, Les Trois Oranges d’Amour by Alfred de Musset, with elements of various other fairy tales stirred into the pot.  My mother and grandmother each told it a little differently, and I'm sure I'm leaving something out.  I'd nearly forgotten the story; I haven't heard it in over 25 years!  And when I tell you what finally drew it from the deep recesses of my mind, you'll laugh.  You see, I bought a new bottle of hand soap for the guest bathroom several weeks ago.  Honey Citrus and Shea Butter.  Sounds innocent enough, right?  But, every time I wash my hands, a spell comes over me.  It has such a dreamy, intoxicating aroma that makes me so hungry.  "I must make something that smells this good!"  I tell myself, then quickly forget as I go about my day. 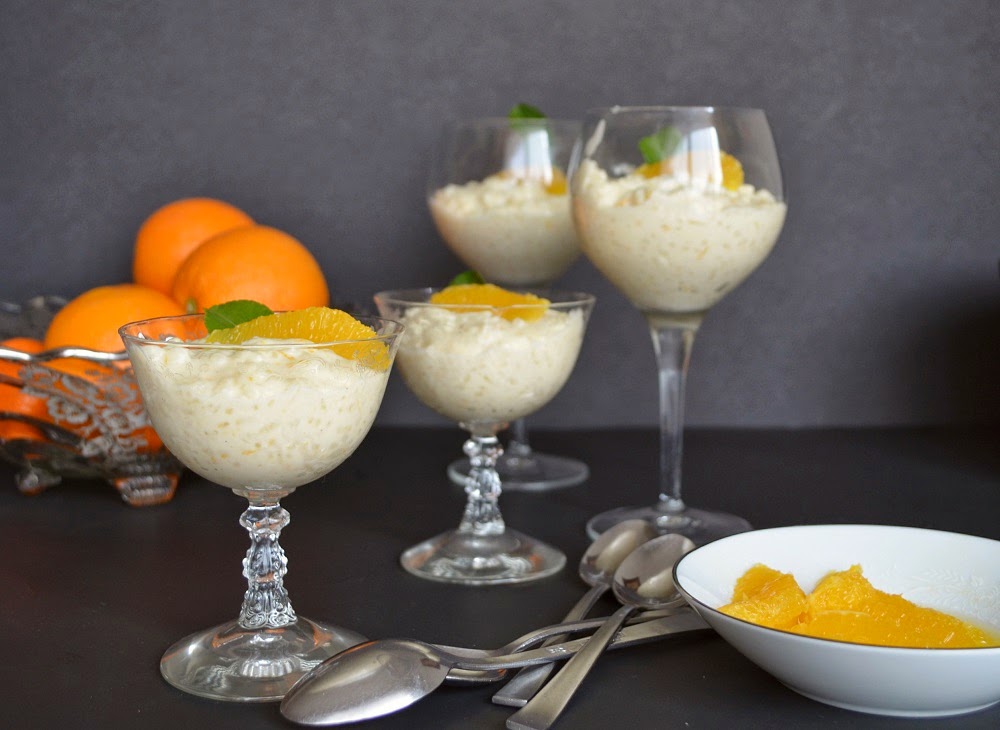 But let me get back to our tale.  My mother would tell it while I lay in bed at night, talking in a quiet voice while she swooped around the room, gathering up toys and clothes and blankets to be put away.


Feeling so overwhelmed with sadness, the prince left immediately on a quest to find these mysterious three oranges.  He searched the countryside far and wide, under every rock and every tree.  He even climbed into the branches, searching for oranges among the leaves.  But alas, oranges didn't grow in this part of the kingdom, and his search with fruitless. (Pun intended.)  Soon he came to the seashore.  Dark clouds hung low in the sky as immense waves violently raked the sand and threatened to wash him out to sea.  Quickly he took shelter in a nearby cave.  It was so very dark that he could barely see his hand in front of his face, but in a flash of lightening he noticed something in the corner.  As he fumbled in the darkness, his hands came to rest on three small boxes.  They were cool to the touch and he quickly stashed them in his bag.


When the rain passed and the sky cleared, the prince left the cave and sat on the beach with his three boxes.  The first was made of the darkest ebony, as black as a moonless midnight.  The second was made of bronze and shown with a brilliance rivaling that of the sun.  The third was made of the purest alabaster, smooth and milky like the freshest sweet cream.

He opened the ebony box first.  Inside sat a plump, fragrant orange.  Immediately the orange came to life and said, "I'm so very thirsty. Please, Sir, take me to water."  The prince was so startled that he threw the orange into the waves and it was immediately swallowed up by a large fish.

Feeling slightly wary, the prince opened the second box, but caught his finger on the sharp lid and blood spilled onto the orange.  He dropped the bloody orange into a puddle at his feet.  "Water, water!" it implored, just before it sizzled and vanished in the light of the setting sun.

A feeling a utter despair came over the prince and, in wails of anguish, he stumbled to a place where a small, cool stream spilled into the sea.  As he fell to the ground sobbing, the alabaster box tumbled softly into the fresh, clean water.  In an instant, from the place where the box came to rest, there stood a beautiful young woman.  Her skin was as white and creamy as alabaster, her lips as red as blood freshly spilled, her hair black and smooth as ebony... 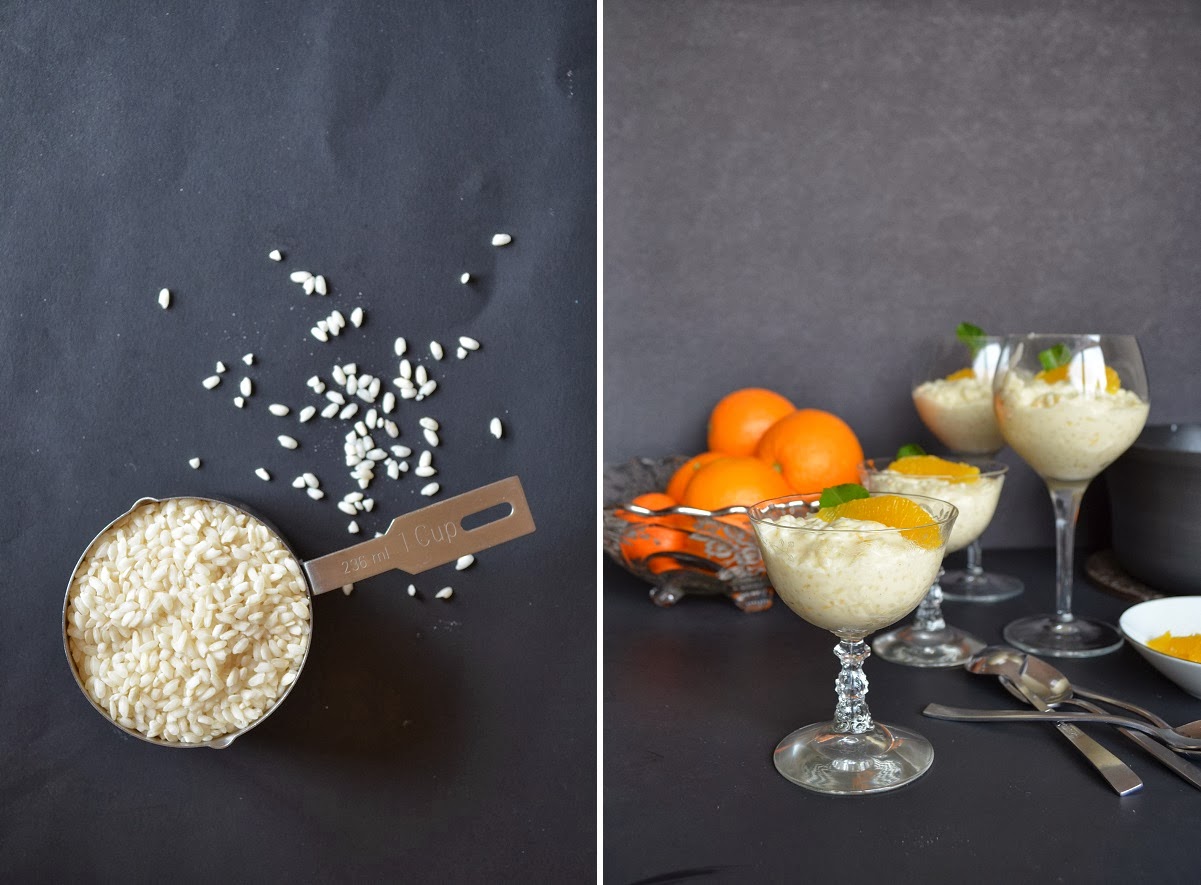 The story goes on, for the evil witch would not let our prince off quite so easily, but by this time I was softly drifting through the veil the keeps our dream just out of reach, so my mother would quietly end the story here-

The prince was smitten by the beautiful young woman and immediately the sadness that weighed on his heart like a stone vanished.  The two were married soon after and lived in happiness for the rest of their days.

Her soft voice would trail off as she tucked the blankets around me and left me to my dreams.  Magical witches, faraway kingdoms, raging storms, and oranges that have the power to bring happiness to even the most dejected of princes.

You're probably wondering what this story and my new, bewitching hand soap have to do with food.  Which brings me back to the recipe at hand.  One day last week as I washed my hands, the aroma was so overwhelming that I knew I had to make something.  Now!  That's when I remembered the story.  It's amazing the memories that surface because of a simple scent.  And so, I set out on a journey of my own to create a recipe combining all the elements of this forgotten tale.  Immediately I thought of rice cooked in milk - as white and creamy as alabaster.  The vanilla beans add rich flecks of the blackest ebony.  And, of course, oranges - fresh and bright, like sunshine after a long storm.  The scent of orange could make even the biggest grump happy!  In fact, the only element I left out was the blood.  (You're welcome!)  I hope you love this rice pudding as much as we do, and please Google the story of the of the three oranges to find out how it ends! 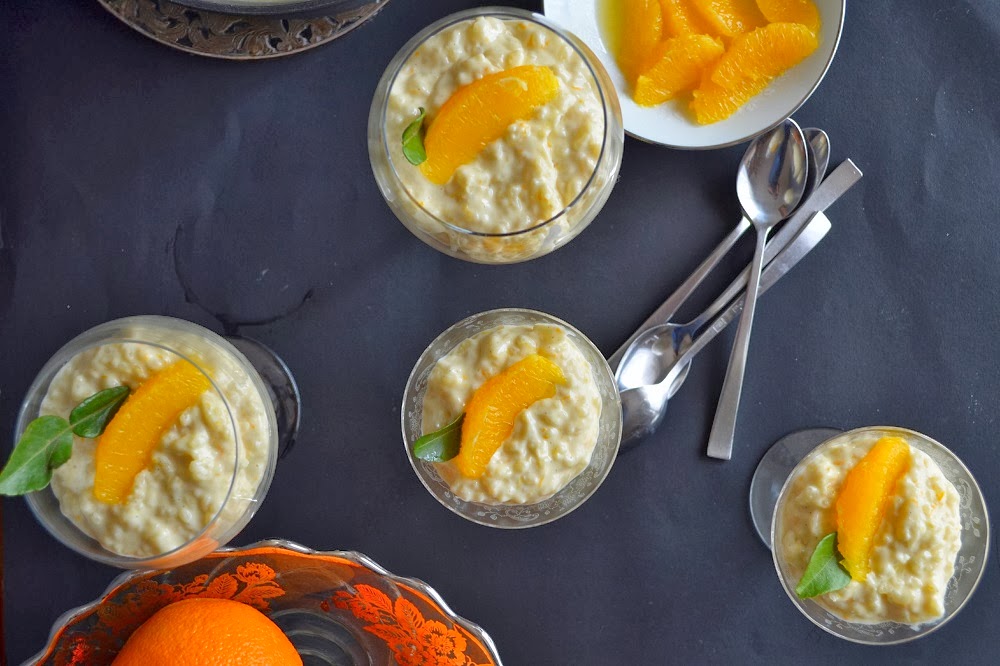 If you liked this, you may also like these Gluten-Free Lemon-Glazed Madeleines, or this Cardamom Spiced Orange Poppy Seed Cake, or maybe even this Spiced Peach Clafoutis. I hope you'll check them out!  Happy Eating!

Zest the orange and lemon, and set aside.  In a large sauce pan combine the milk, rice, salt, and the split vanilla pod (the beans will come out as it cooks).  Bring to a simmer over medium heat, stirring constantly so the milk doesn't burn.  Once the mixture simmers, lower the heat and cook, string frequently for 20 minutes.  Meanwhile, segment the orange and set the segments aside, from the remaining orange pulp, squeeze the juice into the pot with the rice.  After 20 minutes stir in the honey, cream, 1 tsp of orange zest, and 1/2 tsp of lemon zest.  Cook 5 minutes longer, until the rice is tender.  The pudding will thicken as it cools.  Remove from the heat and allow to cool slightly.  Fish out the vanilla pods and spoon the pudding into individual serving bowls.  Garnish with the orange segments (I happened to have some kaffir lime leaves in the fridge so I used them, too).  Serve warm or chilled.  Serves 4 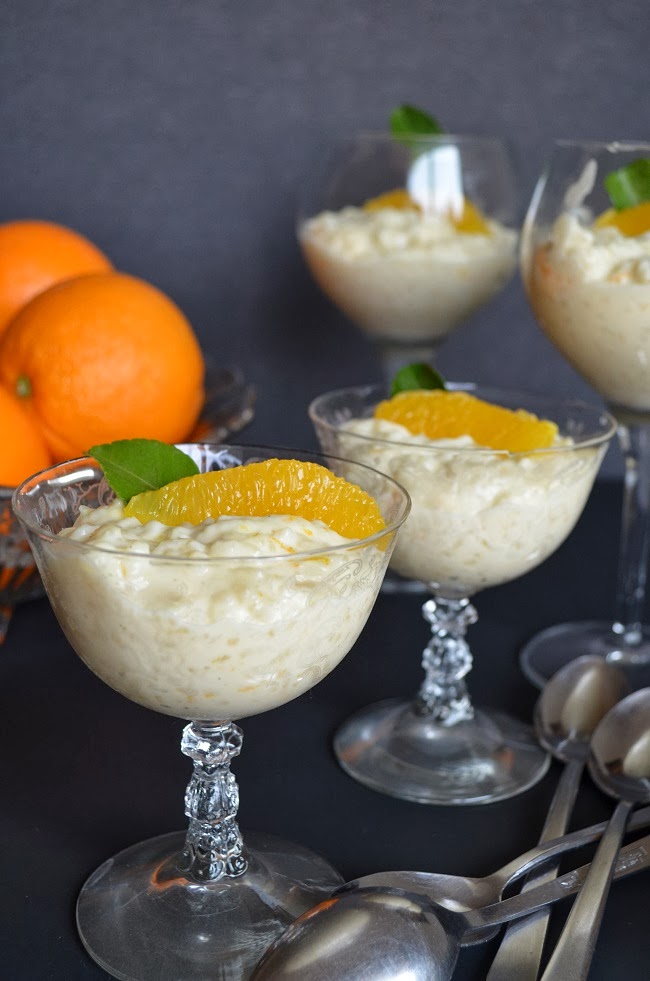