Winter boots and a hat in the snow 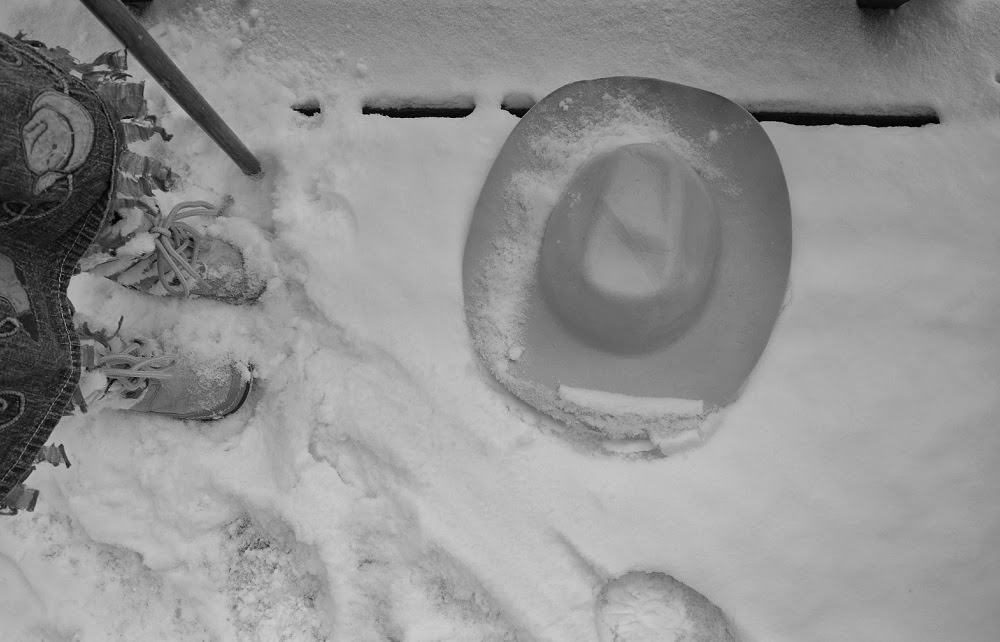 Don't try to buy snow boots in February ... when it's snowing ... in Colorado.  Don't even go looking for rain boots.  You won't find any.  We're caught in the midst of a relentless winter, yet all anyone wants are strappy sandals and flip-flops.  At least that's what you'd think if you visited one of the many shoe stores that I did last Monday, in search of some kind (any kind) of warm boots for my kids.  Like little lumps of bread dough rising in a hot kitchen, I swear their feet have doubled in size over the weekend!

We did finally discover some cold weather boots tucked in the back clearance section of one store.  In tattered boxes with missing lids, we found exactly two pairs.

"Do these look cowgirl-ish?" Eve asked, admiring her feet in the mirror.

"Umm..." I hesitated, "are they supposed to look cowgirl-ish?"

"Yes!" she replied.  I was becoming frazzled.

"Then, yes."  I assured her.  "They look just like what a cowgirl would wear in the winter - a princess cowgirl." I added just in case.

"Then let's get them!"   She jumped up and down in excitement.  Guess she takes after me.

They're not what I would have chosen if I'd had a choice, but I was happy we found some at all. Just in time, too, as another wave of snow arrived early Tuesday morning, and it hasn't stopped since. 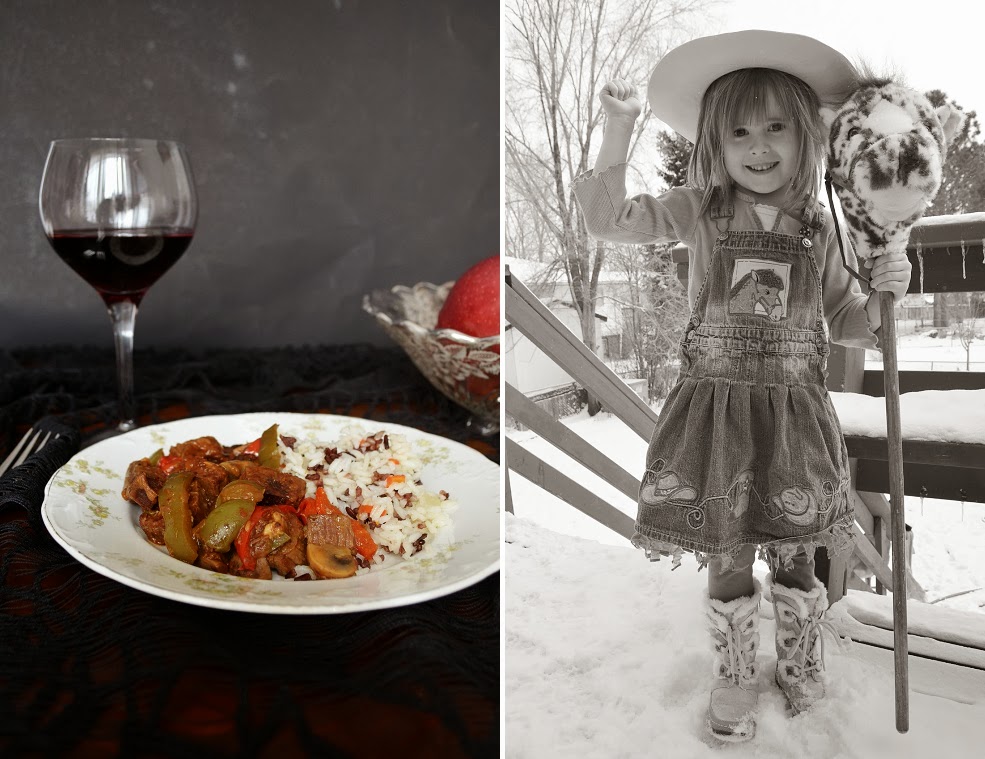 The schools are closed and Eve would love nothing more than to gallop through the back yard in her new boots on her hobby horse named Chocolat, but her breath freezes in the icy air and the fierce wind blows her hat into the snow, and she begins to cry.


On days like today it's better to just hunker down inside.  Freezing fog crept in over night and the roads are sheets of ice.  The snow is a fine powder, it's much too cold to contain much water, and it coats the tree branches and car like a thick layer of dust in a long forgotten room.  And I'm craving something warm and stew-y, cooked in the crock pot, not so much because crock pot cooking is easy (that's nice, yes), or for the convince of not having to fuss over it at dinner time (I like to fuss over dinner), but rather for the way it makes the house smell.  So inviting and so comforting. 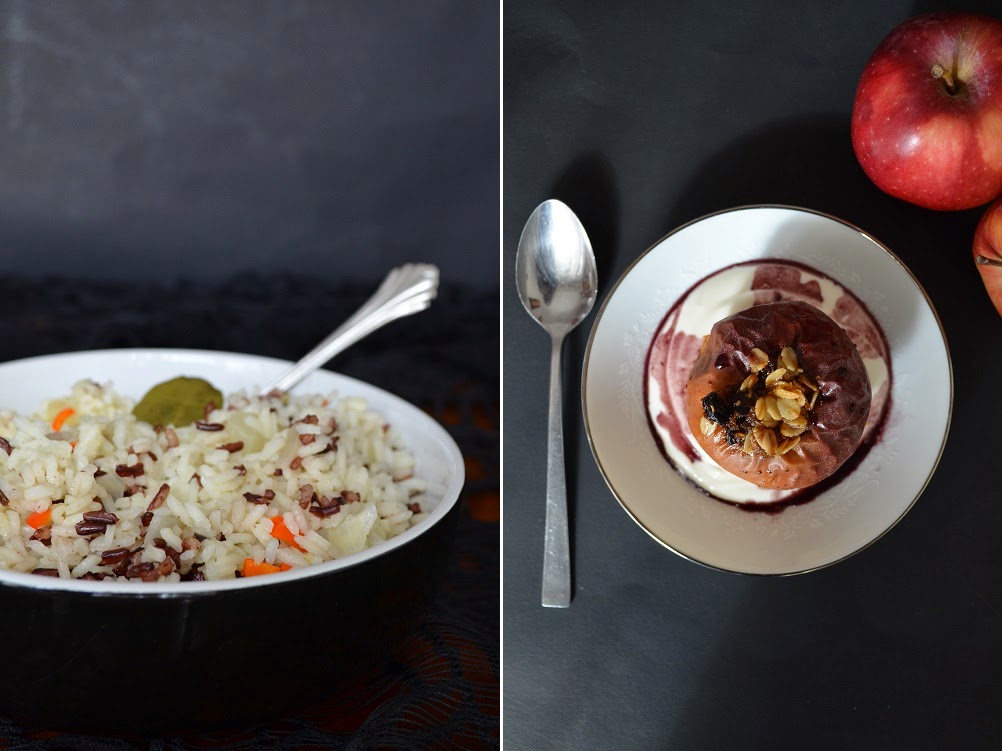 I decided on pepper steak, just like my mother use to make.  And since I didn't have to fuss over dinner, I had plenty of time to focus on the sides and dessert.  I wanted a rice pilaf, the perfect dish to soak up all the beautiful sauce from the steak.  But not just any pilaf, this one is made with both black and white rice.  I cook the rice separately so the black rice doesn't bleed and turn the whole thing purple. For dessert I wanted something warm, but not heavy.  The bowl of apples on the table caught my eye and their colour reminded me that there was a nearly empty bottle of Cabernet Sauvignon in the refrigerator.  How perfect they would be together, I thought, served with a dollop of Greek yogurt!  And so the meal took shape. 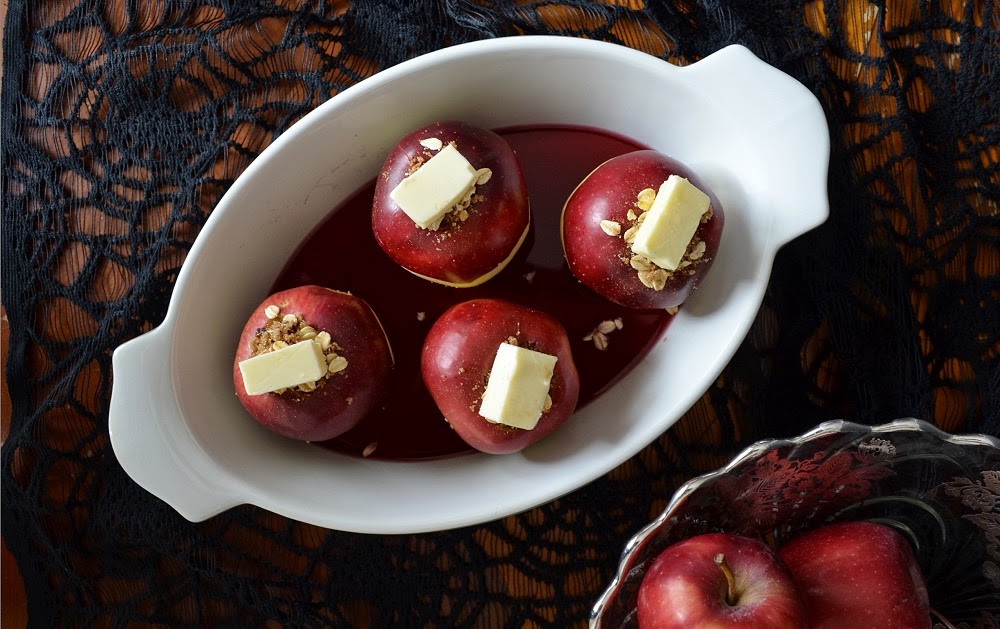 As I'm stuffing the apples with oats and brown sugar, raisins and cinnamon, Eve and Chocolat gallop through the kitchen, followed by the dog who catches the corner of a tower of blocks, strewing them across the floor.  I try not to yell, but my patience is running thin and, the truth is, I'm going a little stir crazy myself.  I take a deep breath, and the aromas of caramelized onion and garlic, warm ginger and cinnamon are like a soothing balm to my frayed nerves.  Now do you see why I like cooking in the slow cooker?  It reminds us that no matter how hard the wind blows, no matter how cold our feet get, or if our hat gets blown into the snow, no matter how many blocks are scattered across the floor, there's always warmth and love in the kitchen.  Always.  And isn't that what food is all about? 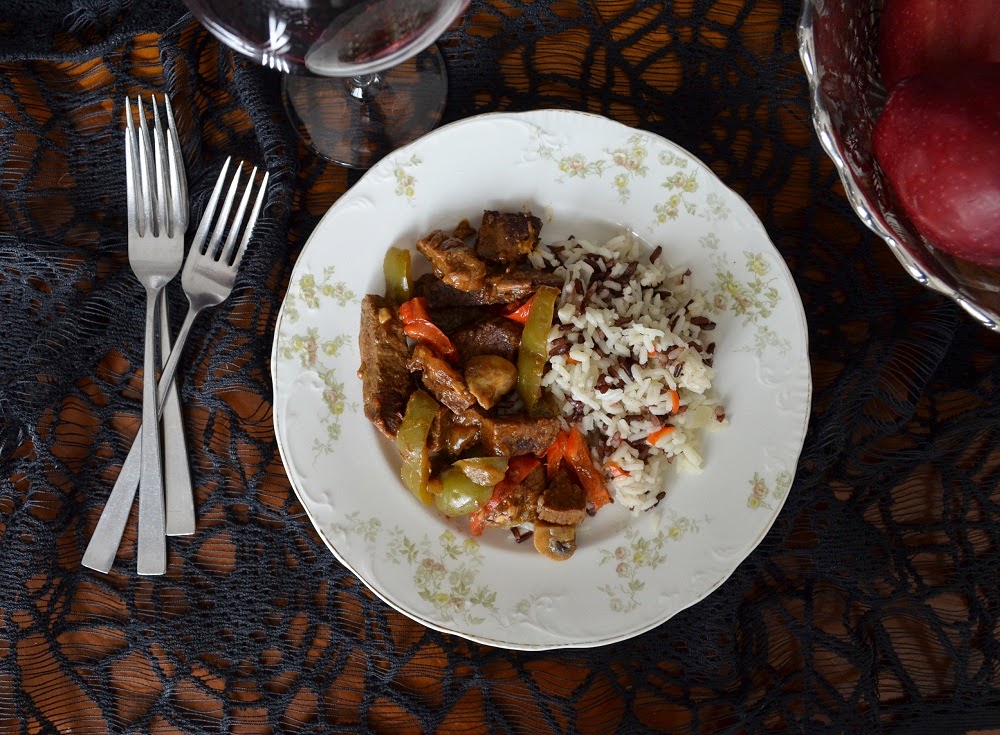 Heat the oil in a large pan.  Brown the beef and sprinkle with a pinch of salt and pepper.  Place in slow cooker.  Add the sliced onions to the pan and cook until they begin to soften.  Add the garlic and cook an additional minute or two.  Pour in the water and soy sauce and stir, scraping up the brown bits from the bottom of the pan.  Stir in the sugar, ginger, tomato paste, and red pepper flakes.  Bring to a simmer and pour over the meat in the slow cooker.  Stir in the tapioca and cover.  Cook on low for 5 - 6 hours.  Add the peppers and mushrooms, and cook an additional hour.  Garnish with the green onions and serve over rice. 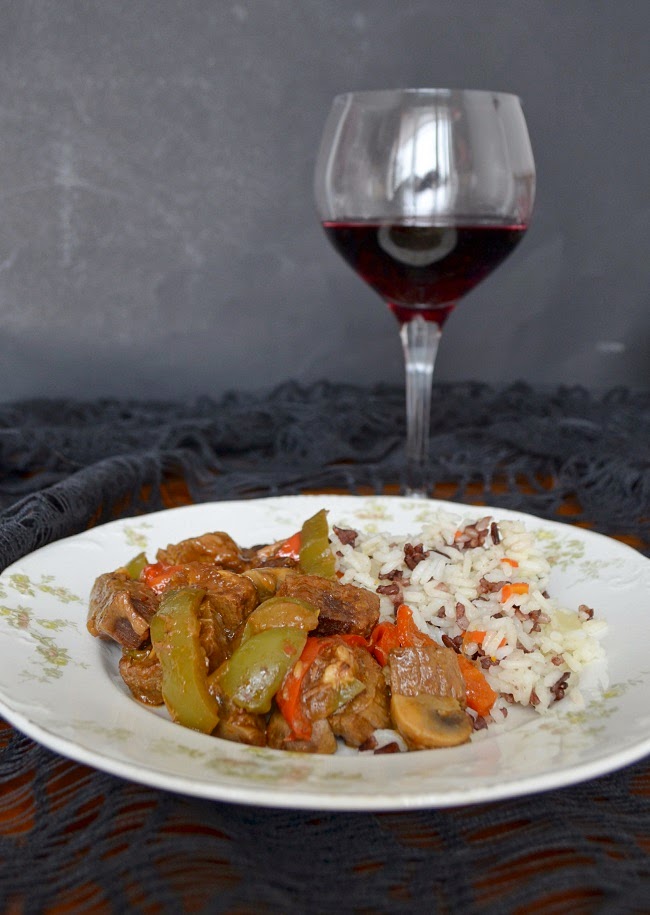 In a small sauce pan cook the black rice in the water with a pinch of salt according to package directions (about 45 minutes, until the water is absorbed).  Place the cooked rice in a serving bowl and wash the pan.  Place the pan back on the heat and add the oil.  Cook the onion, pepper and garlic (with a large pinch of salt) in the oil until just soft, about 5 minutes (don't let them brown).  Add the white rice to the pan and stir until the rice is toasty and fragrant (about 3 min.).  Stir in the chicken stock and bay leaf.  Cover and simmer 15 minutes.  Place the white rice in the bowl with the black rice and toss gently with a fork to combine.  Taste for seasoning and drizzle with a little more olive oil just before serving. 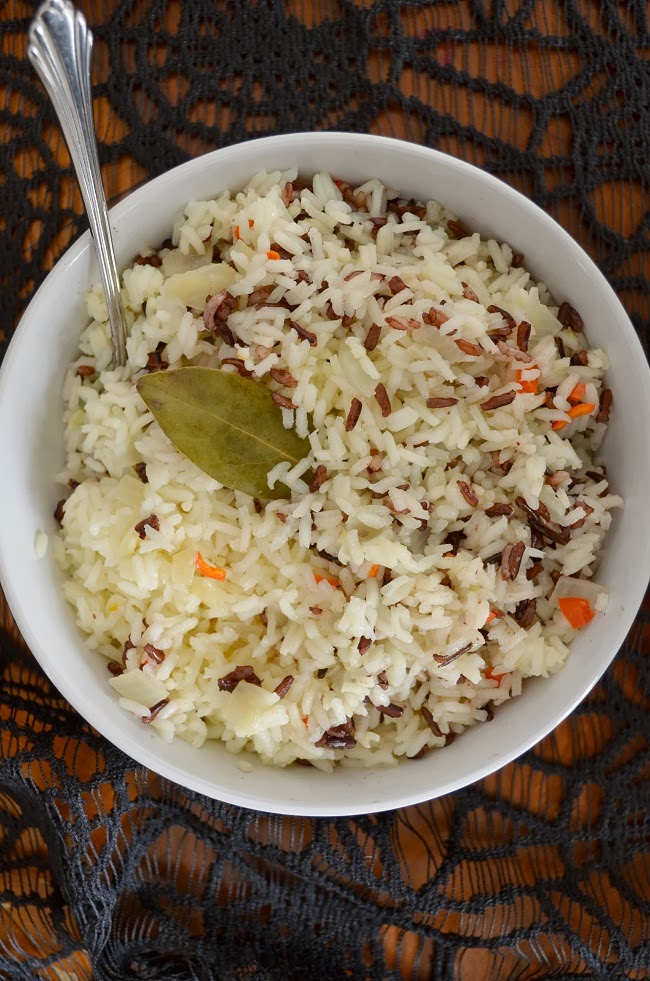 Preheat the oven to 375 F (190 C).  With a small knife cut out the stem of the apple, then with a small spoon scoop out the core, being sure to remove all the seeds, but do not cut through the bottom of the apple.  In a small bowl mix together the oats, sugar, raisins, cinnamon, and salt.  Pack the mixture into the apples and place them in a baking dish that's just large enough to the hold them.  Top each apple with a cube of butter and pour the wine and the water into the bottom of the pan.  Bake the apples for 45 - 50 minutes, until soft and cooked through.  Remove the apples to a plate and strain the pan juices into a small sauce pan.  Stir in the remaining 1 tsp brown sugar and bring to a boil.  Reduce the sauce to about 1/4 cup.   To serve, place a few dollops of yogurt in the bottom of a shallow bowl.  Place an apple on top and drizzle with the Cabernet syrup. 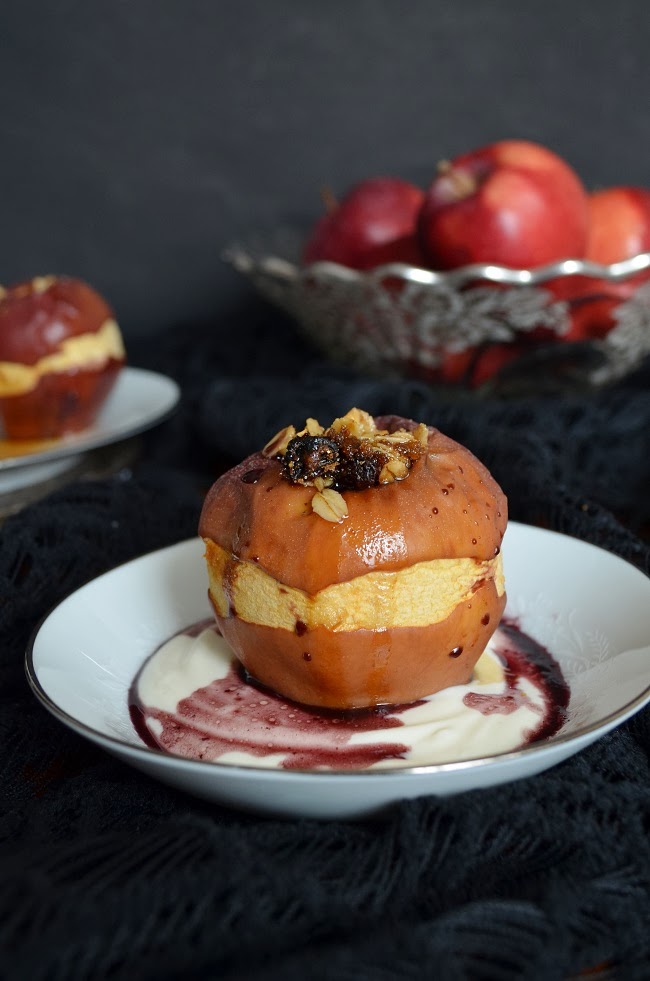