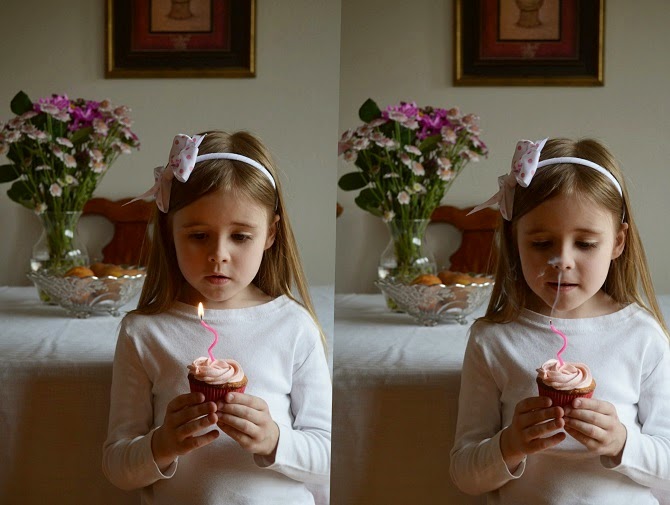 "Cinderella, dressed in yella, went up stairs to kiss a fella.  Made a mistake and kissed a snake!  How many doctors did it take?"


It all started two months ago.  I was picking the kids up from school on an icy February afternoon.  The kind of day when the wind whips in biting gusts between the buildings and razor-sharp bits of snow sting your face.  I can't even call them "snowflakes" because "knives" are a much more accurate description.  I wrapped my scarf around my chin as I walked the block and a half from where I'd parked the car to their schoolhouse.  I was eager to get home, turn on the stove and start a pot of mushroom risotto for dinner.  As we drove home, she told me that she wanted to have her birthday party at a certain pizza place.  You, no doubt, know the one - singing robots, silly music,  flashing lights & the electronic hum of enough arcade games to make you half crazy, and mediocre pizza at best.  I think every town must have one and there's nothing wrong with this restaurant, once or twice in a blue moon.  But we've celebrated more than our fair share of birthdays there.   And in any case, I had other plans in mind. 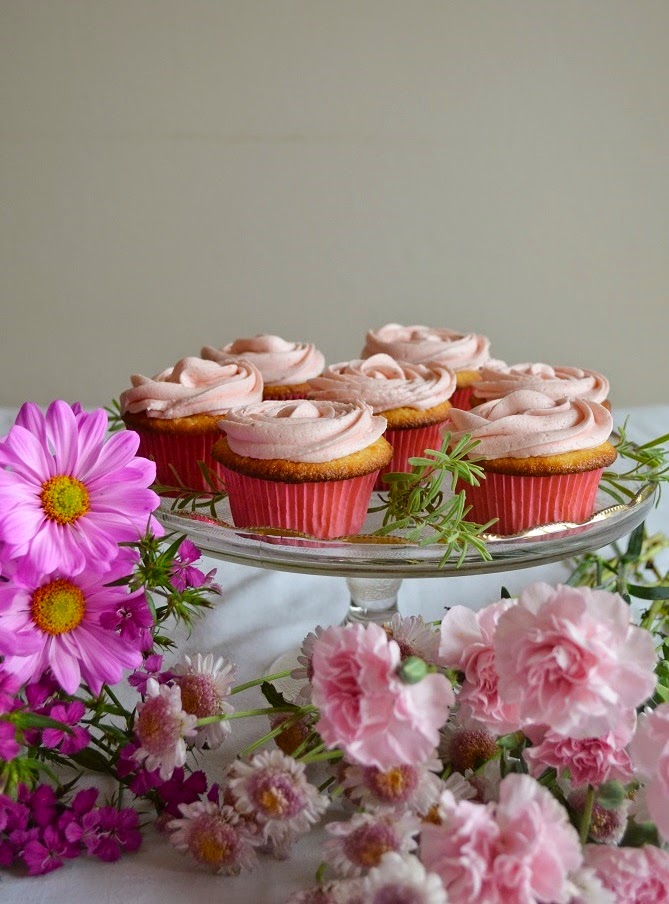 She planted a seed that February afternoon and I began dreaming of April!  Dreaming of the promise of warmer weather (though no less temperamental, I must say).  Of planting the first pea and lettuce seeds in the garden, of cutting the first lilacs for the dining room table and watching the irises open-wide their bright faces to the sun.  Of cherry blossoms, green grass, and rain instead of needle-like snow!  I'd been planning a garden tea party for months, since her last birthday party, in fact, though in Colorado, the garden is only just awakening from it's winter slumber in mid-April and the weather is still quite cool.  So we'd bring the garden into the kitchen.  We'd tape flowers to the walls and butterflies to the ceiling.  And there would be vases of flowers of all sorts.  The only requirement being that they are all pink, naturally.  We sent Grandma out on a special mission to scour all the second hand stores and antique shops in town for just the right China tea cups with matching saucers.  A fun job it you ask me!  Each cup would be different and unique like the guests themselves, but each would have a pretty floral design that would fit beautifully in to the garden that our kitchen would become! 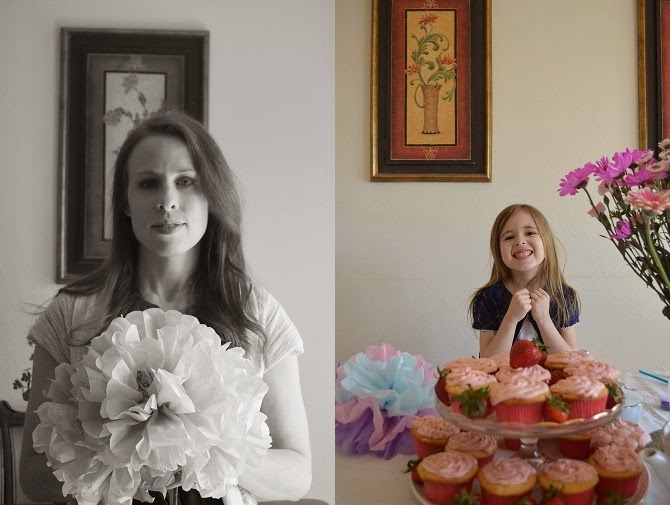 And so over the next few weeks the plans developed, growing from that tiny seed she planted on that cold February afternoon, until the morning of the party arrived.  In a swirl of tulle and satin, the girls began knocking at our door, all dressed in their very best springtime dresses and straw hats.  Eve led them up the stairs to the garden in the kitchen, skirts rustling, sequins sparkling.

We crafted garden flowers out of tissue paper in every colour of the rainbow (here's how), drank pot after pot of blueberry tea with sugar which turned our dainty cups a beautiful shade of sapphire on the inside, and skipped rope in the cool sunshine, singing:

Cinderella,
Dressed in yella,
Went up stairs to kiss a fella.
Made a mistake and kissed a snake.
How many doctors did it take...?

But the star of the show, aside from the birthday girl herself, were these vanilla bean cupcakes with fresh strawberry buttercream.  They looked like a bouquet of  little roses picked from the garden (if only the roses were blooming!) 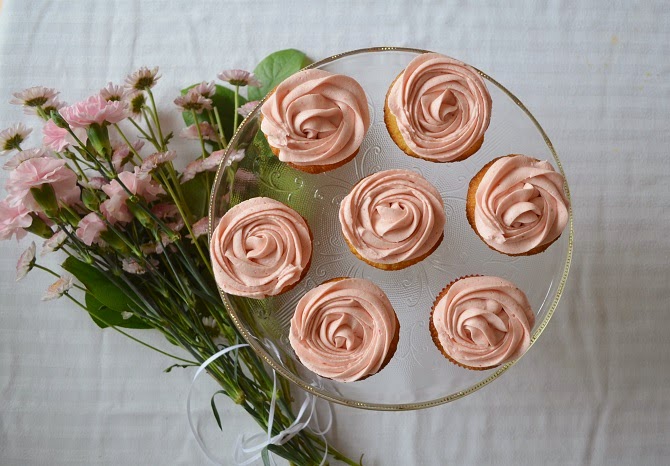 I've been playing with this strawberry buttercream for a while.  All the recipes I've seen require the strawberry purée be reduced down on the stove beforehand.  Quite frankly, I wanted something easier.  Something that uses fresh strawberry puree, is all-natural (no food colouring, no artificial flavours), and most importantly, is just the right shade of pink!  Because these things matter! Something I can whip up at midnight the next time Eve needs a safe dessert.  Because when you have kids with food allergies you end up making A LOT of cupcakes at midnight - for birthday parties, school parties, dinner parties, I could go on.  This recipe is it!   And it's so simple!  Just purée the strawberries and strain out the seeds, then everything gets creamed together like a regular buttercream!  No cooking required!  This frosting pipes beautifully, as long as you've strained it first.  But you could certainly skip that step if you'd rather spread the frosting on the cupcakes instead.  So simple!

The day was beautiful.  Something I know she'll remember for years to come, and I feel a tinge of sadness now that it's behind us.  But I'm already looking forward to the next birthday party in August.  I have a few ideas up my sleeve, and you can be quite certain that this buttercream will play a staring role in that one, as well!

Sift the flour, baking powder, and salt together into a large mixing bowl.  With and electric mixer, slowly beat in the butter until just incorporated.  Beat in the sugar and vanilla beans.  Then the eggs, one at a time.  Mix the vanilla and milk and slowly beat this in until everything is just combined.

Pour the patter into the prepared pans, filling the cupcake molds 2/3 of the way full.  Bake for 18 - 20 minutes.  Test for doneness with a toothpick or wooden skewer.  Cool completely before unmolding and icing.

Wash and hull the strawberries.  Purée in a food processor until smooth.  Press the strawberry purée through a fine mesh sieve and set aside.

Refrigerate until ready to serve. 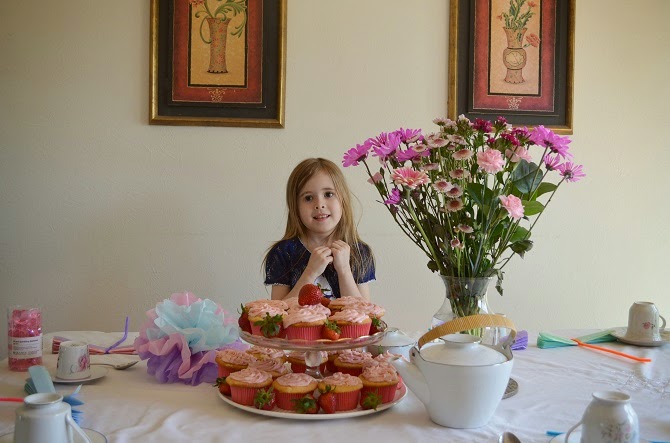