Something in October {Carnival Squash Soup with Maple} 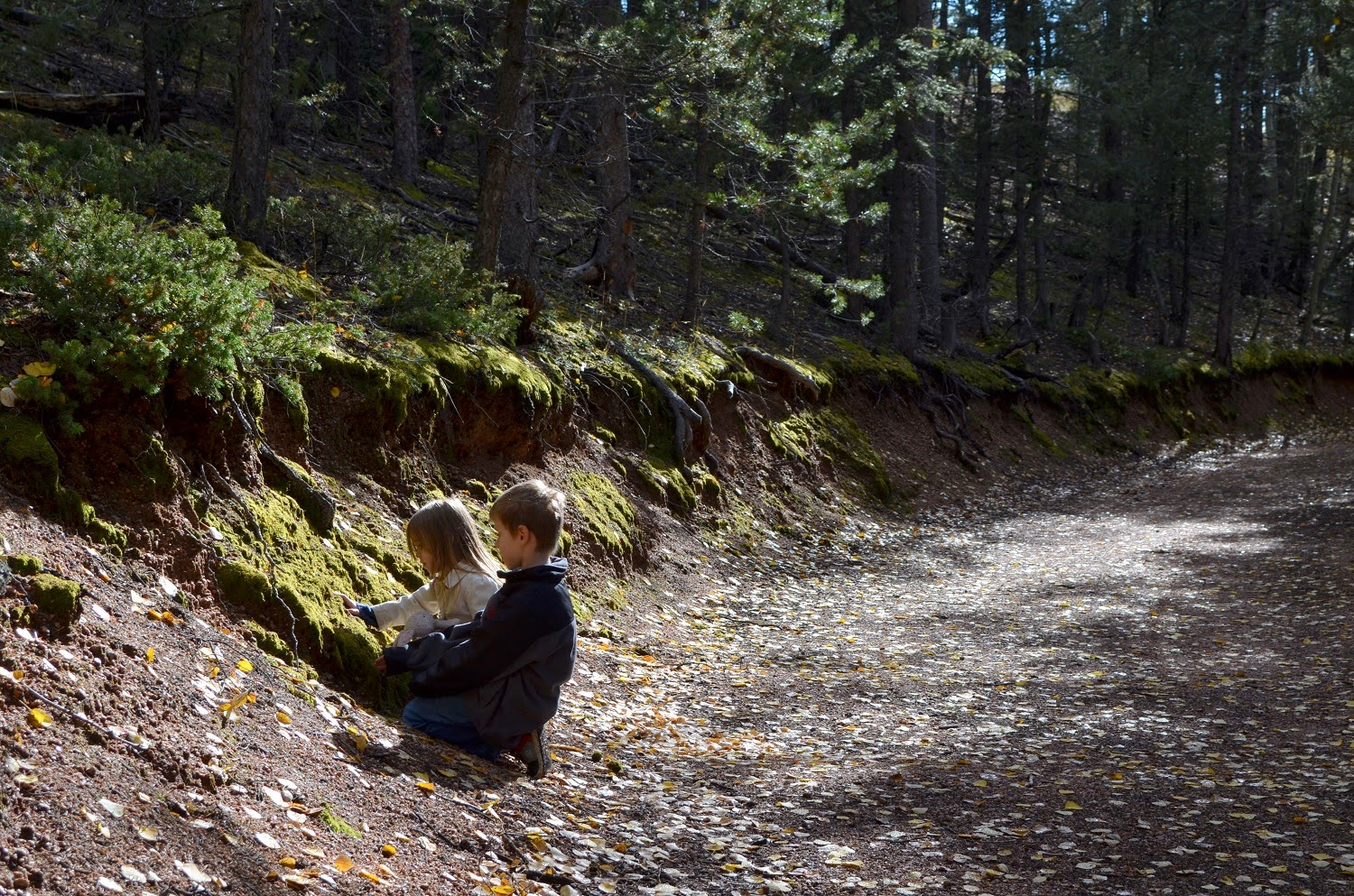 There's an old poem by Bliss Carman called A Vagabond Song.  The first stanza goes like this...

There is something in the Autumn that is native to my blood-
Touch of manner, hint of mood;
And my heart is like a rhyme,
With the yellow and the purple and the crimson keeping time.

I must have first read this poem years ago as an English major in college.  I think of it often, walking down the tree lined streets; crimson, purple, and yellow in all their autumn splendor, leaves drifting, soft as feathers, to land on the curb below. 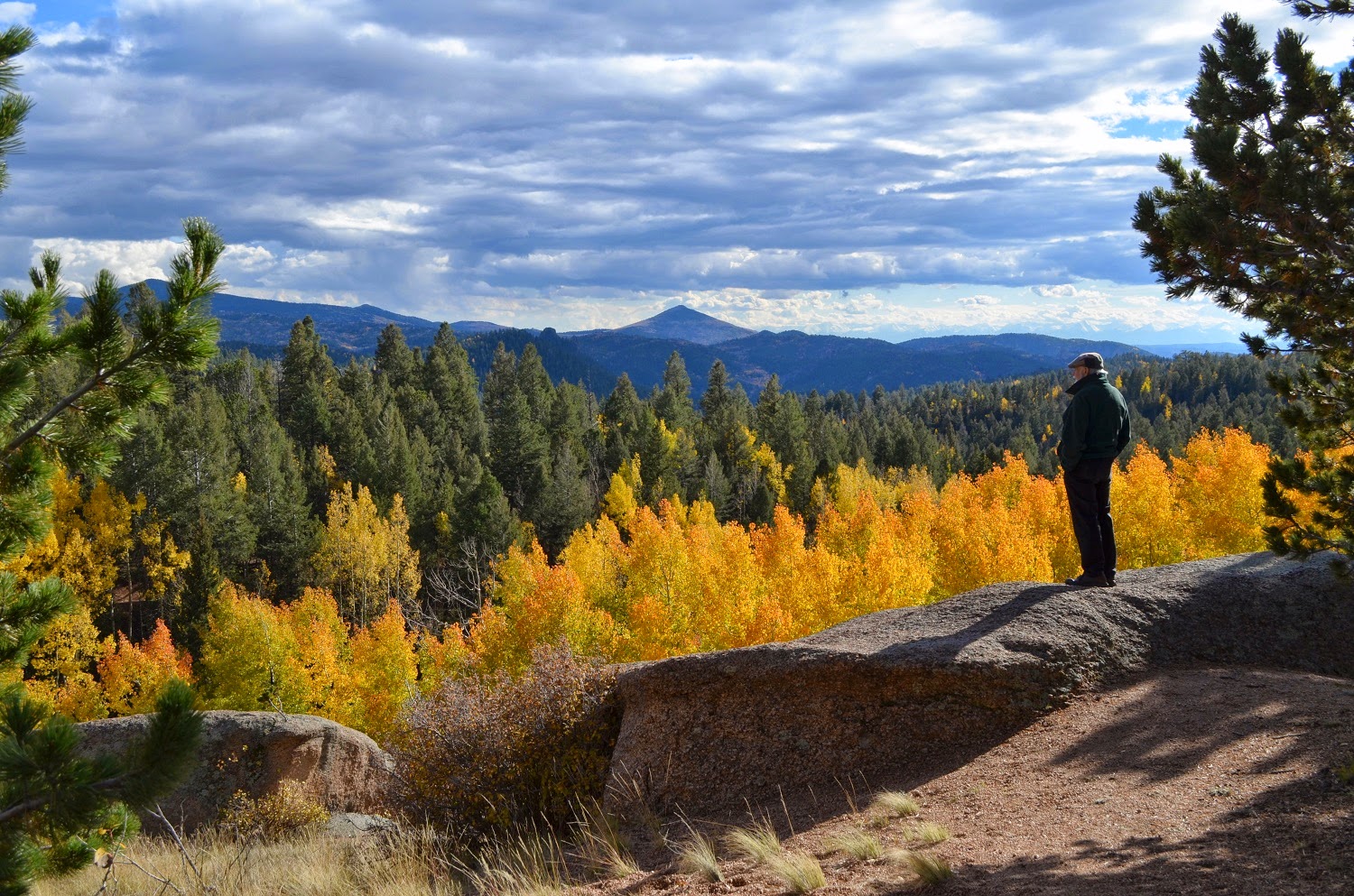 But it's not the first stanza of that poem that's resonated within me all these years.  It's the last...

There is something in October sets the gypsy blood astir-
We must rise and follow her;
When from every hill a flame
She calls and calls each vagabond by name.

I've always felt that I have a bit of gypsy blood flowing through my veins, passed down from my father, no doubt, an author and artist by nature.  The blood of an artist is never satisfied.  There's always that deep pulling, that ever distant calling to go somewhere different, to wander, to explore, to look beyond the veil that separates reality from the imaginary, to stretch the limits and to reach for more.  All the while nurturing this thing within.  This thing that will eventually be called ART, if it doesn't drive you mad first. For me this feeling is especially persistent in October, when change buzzes like electricity through the chill fall air.


And so, to quite the voice of October, I venture into the mountains. Where, around every bend in the trail, behind every bolder, and within every grove of bejeweled golden-leafed trees, lies an intangible force that calms my gypsy blood.  The spirit of the forest, perhaps?  Or maybe something else. 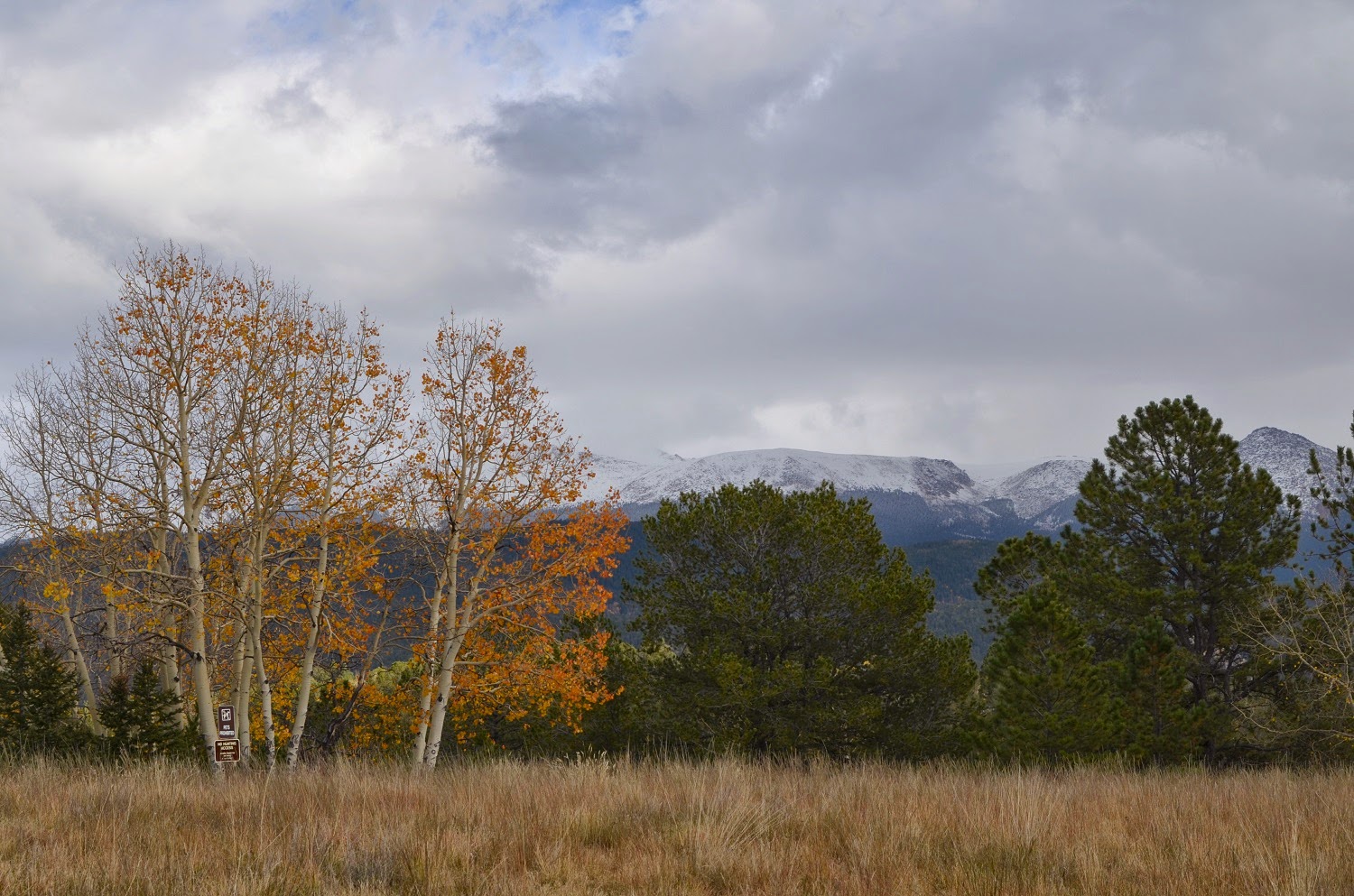 Much like my restless heart, the weather in Colorado, in October, is fickle, too.  Glorious and sunny as we drive the switch-backs deep into the forest, yet even as I pull the car over on a wide spot in the road, it's already beginning to change.  We throw on sweaters, scarves and anything else that I can find rummaging through the trunk, stowed from last winter and forgotten.  As we set out on the narrow foot trail, the clouds descend like a tide rolling in, suffocating, and the icy wind begins to rustle the leaves as tiny flecks of snow spit from the leaden sky.  It's like Mother Earth is reminding us, "Don't get too comfortable, change is on her way. . . "  Sometimes we need a little reminder.  Yet minutes later, the storm is over.  The sun returns; the fine sheet of snow shimmers like silver on the forest floor for just a few minutes before melting away.  It's on days like these, busy and tumultuous with change, that I want something hearty, steadfast and comforting.  Something that will warm the kitchen and bring a little sunshine to the table on even the most cloudy of days. 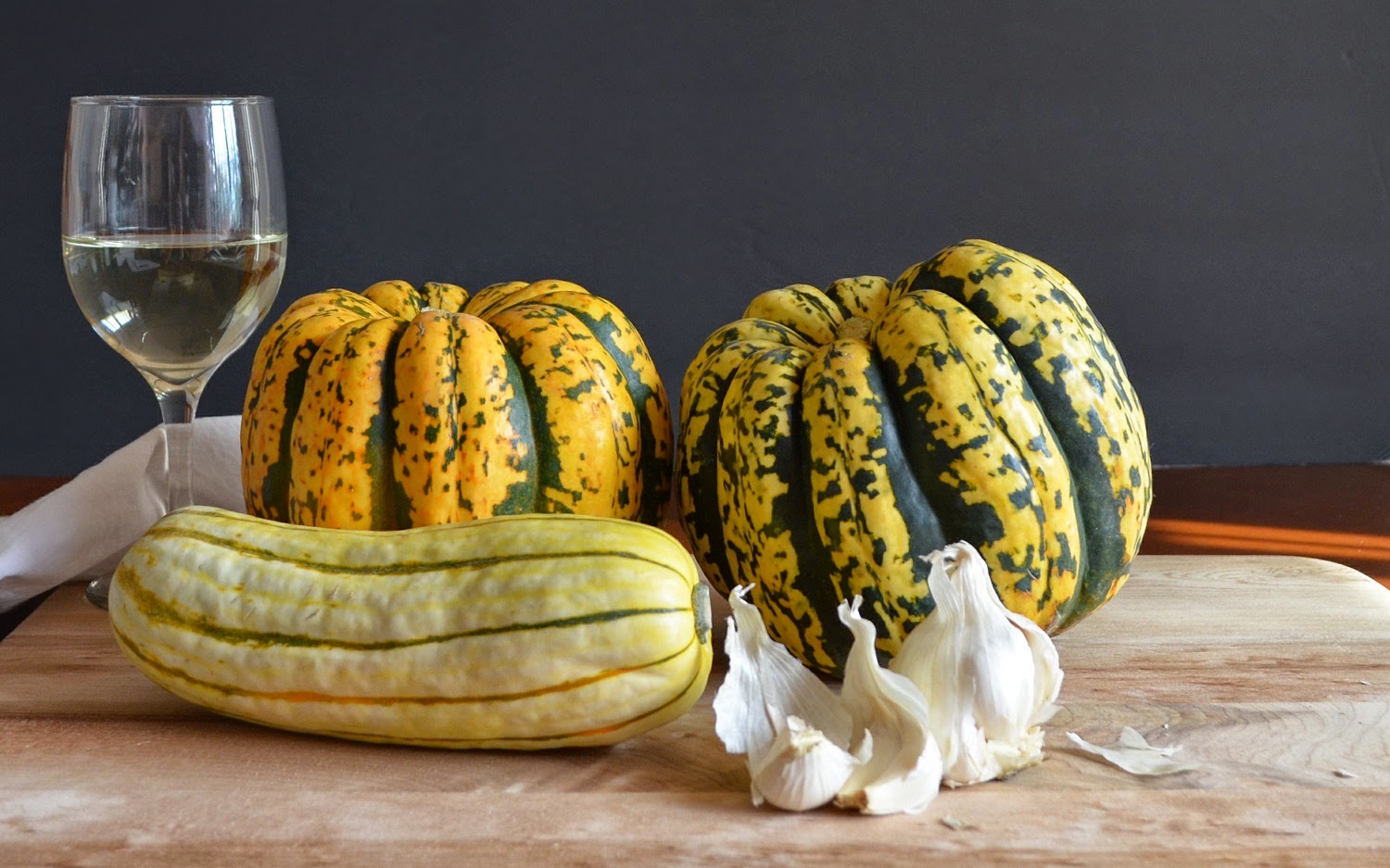 I found some festive carnival squash at the market last week and couldn't resist!  They were so beautiful that I let them sit on my counter - a work of ART in and of themselves.

That is until the weather changed and we came home from the mountains, cold and damp from head to toe.  As I walked in the door, I automatically turned on the oven, a habit I have when coming home around dinnertime - though I didn't know what I wanted to cook.  Then I took stock of the kitchen and my eyes fell on those lovely squash.  Alas, their days as ART were over.  That night they would become dinner.   I cut them open, gave them a good rub-down with olive oil and stuck them in the oven, still not knowing exactly what they would become. As they roasted and I began to warm, the recipe started taking shape inside my head.  Roasted squash soup, with fresh thyme and sage - the only herbs in my garden that managed to survive the frost.  And a touch of maple to sweeten it up a bit.  Yes, it sounded good to me! 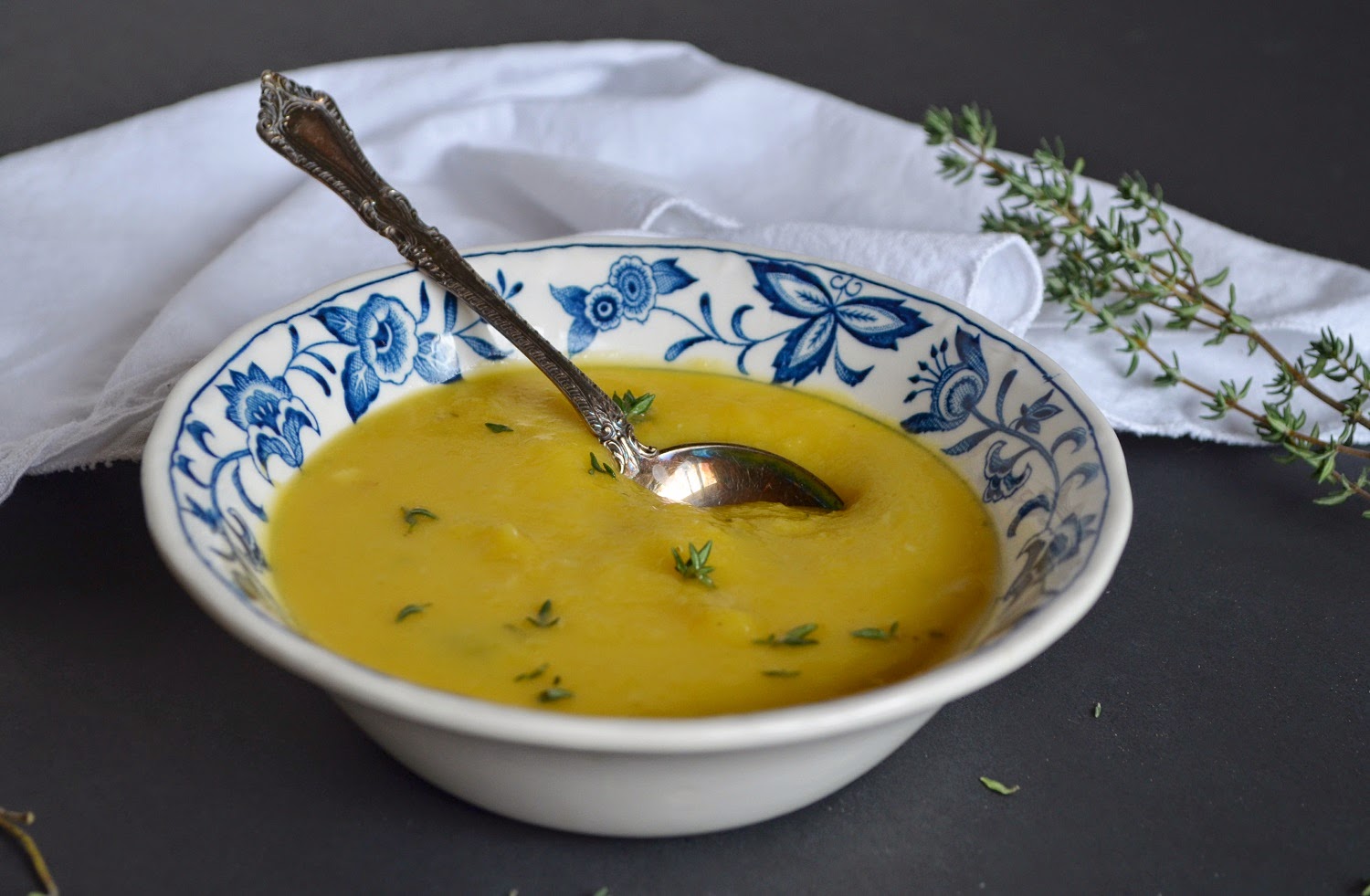 Carnival squash is mild and slightly sweet.  If you can't find it, don't worry.  Combine a small acorn squash with a small butternut squash for a similar taste.

Cut the squash in half and remove the seeds.  Rub them with oil and sprinkle with salt and pepper.  Place cut side up in a baking dish that has been lined with foil.  Roast for approx. 1 hour or until soft and slightly caramelized.  Remove and allow to cool to touch.

While the squash cools, melt the butter in a large soup pot over medium heat.  Add the onion and garlic and cook over med-low until the onions are soft but not brown, about 10 minutes.  Add the thyme sprig whole, and the sage.  With a spoon, scoop out the cooked squash and add it to the pot.  Add the chicken broth and maple syrup, and bring to a simmer.  Season with salt and pepper and simmer 5 - 10 minutes.

Remove the thyme sprig (most of the leaves will have fallen off into the soup.)  Puree the soup in small batches in the blender or with an immersion blender.  Pour the soup back into the pot and add the milk.  Bring to a simmer.  Serve hot. 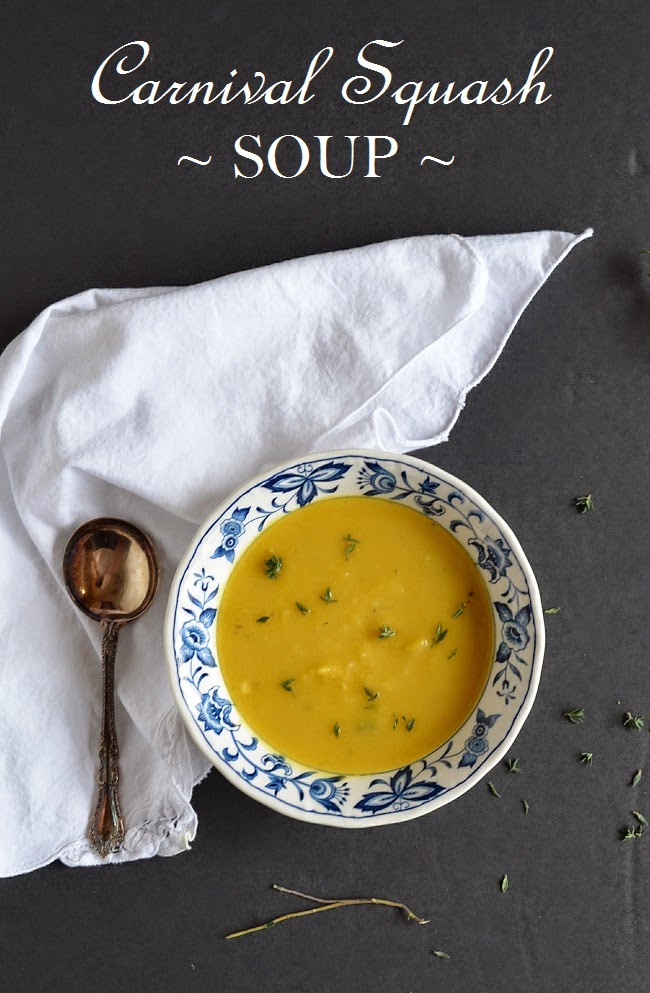